Bohs have struggled since their opening day win over Shamrock Rovers, but Bray Wanderers have even bigger woes since they held Dundalk on their first outing.

Both sides will be despeate for the points as they currently occupy the play-off and relegation spot in the division. It's early days but the pressure is on going into this game. 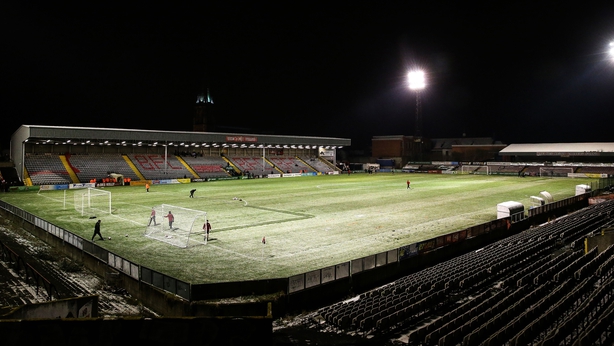 Bohemians:  Captain Derek Pender is ruled out after being forced off against Cork City with a calf strain.

Fellow defender Rob Cornwall is a doubt with a virus.

Keith Long (Bohemians): "Some of our play has been very good and maybe we haven't got what we deserved at times.

"We don't lack for effort and desire, but our decision-making and final pass in the final third needs to be better in order to create more goal-scoring opportunities and to work the opposition goalkeeper more.

"Defending well gives you a platform to perform and if you are solid at the back, you are always in contention."

It is strange to see a Liam Buckley side focus on defence, but they have really tightened up in the last two matches against Dundalk and Shamrock Rovers. A tactical change is always a good idea, but it yielded just one point for the Saints and clearly they will loosen up a bit ahead of the visit of Limerick.

The visitors will rue a late penalty against Shamrock Rovers. The steady start under Tommy Barrett has been very welcome and they will fancy another positive result.

St Pat's Athletic: The hosts have a full squad for the first time this season.  Pat's will have midfielder Jamie Lennon back from an ankle injury for the game, while Killian Brennan and Thomas Byrne are back in full training. New signing Tyson Farago from Edmonton FC is also hoping to receive international clearance ahead of the game.

SIGNING NEWS: Canadian Goalkeeper Tyson Farago Joins Saints - Please welcome @Tysonjfarago to the club. He's been telling us how his move from the North American Soccer League came about & how he's finding life in Dublin so far #Saints2018 #WelcomeTyson pic.twitter.com/6uIrmr7mQR

Liam Buckley (St Pat's Athletic): "Limerick have made a steady start to the league. They have had some very impressive results, including a draw against Cork City only last week.

"We know they have several experienced players in their ranks including a few who have played with ourselves so we will face a tough game on Friday night.

"Our performances at home have been steady so far so we are looking to make Richmond a fortress this season and make it as difficult as possible for teams coming to Inchicore.

"Our supporters have been great and really got behind us in our recent games. We will be looking for that again on Friday, and hopefully we can send them home happy with a win."

Tommy Barrett (Limerick): "St Pat’s are a very good side. They have technically very good players, they like to play good football, and they seem to have tightened up at the back a bit better this year.

"It will be a very difficult task for us, but every game is difficult for us. We have to be on it, we have to be ready to battle, ready to keep it tight, and see can we get a goal.

"St Pat’s will have looked at us now and I’m sure they will have their own game-plan. They can score goals from all over the park. It’s a really difficult task for us going up there, but we’ll give it our best shot."

A brilliant clash at the RSC and the RTÉ2 cameras will be there to broadcast the game for you. Waterford have taken to the Premier Division in tremendous fashion on their return and there is talk of a push for Europe, albeit not from their camp.

Shamrock Rovers notched two narrow 1-0 wins over the St Patrick's Day programme to bring them right up with Cork City and Dundalk and can go top with a win because the Leesiders are not in action.

Don't forget that after the @FAIreland game, we've have @WaterfordFCie vs @ShamrockRovers at the RSC live on @RTE2 and @RTEplayer at 7:30pm.@KevinDoyle1983 and Brian Kerr in studio with Peter Collins

Waterford FC: Waterford will be without the services of Rory Feely who has not trained since being forced off with an injury against Bohemians in the Blues' previous home game.

Izzy Akinade and Stanley Aborah have both sustained injuries in training and have been ruled out for Friday's clash.

Midfielder Bastien Héry is back in light training following the injuries that limited his game time against Sligo Rovers and Bohemians and ruled him out of last week's clash with Dundalk at Oriel Park.

Courtney Duffus will be assessed ahead of kick off.

Shamrock Rovers: Sean Kavanagh is suspended following his red card against Limerick, but otherwise Bradley has all other players available.

Alan Reynolds (Waterford FC): "Friday is a special one because there is great tradition between Waterford and Shamrock Rovers down through the years. I have played for both clubs, so I know what it’s like and I’m sure that there will be a cracking atmosphere at the game.

"We’re lucky to have some of the most passionate fans in the league here in Waterford who continue to get behind us both home and away but it’s vital that they are the 12th man for us during this game.

"Shamrock Rovers are one of the top sides in the league and we know how difficult this game is going to be. I don’t think that we’ll be found wanting for effort and I’m confident that we can be on the right side of the result."

Stephen Bradley (Shamrock Rovers): "Waterford have started well and I’m sure they’ll expect to be up there come the end of the season. They’ve some good players so it’ll be a really tough game.

"They’ve played different ways this season, they’ve played a diamond, they went up to Dundalk and played a different formation so we’ve got to be ready for whatever they bring, whether they play through midfield or more direct.

"We’ve got to be ready for both and make sure we bring our top game and come out on the right side of a result. It’s a big game considering the history between the two clubs.

"There’s been some good games down the years and it’s been a long time since we played down there. But we can’t worry about any of that, it hasn’t anything to do with this group.

"We’ll approach the game like any other game and go and try and win it."