Lionel Messi scored for the sixth consecutive game as Barcelona tightened their grip in the title race with a 2-0 La Liga win over Athletic Bilbao.

Messi took his tally for the season to 38 with a fine finish from the edge of the penalty area.

Paco Alcacer had already put the hosts ahead at the Nou Camp, and the leaders went on to canter to a routine victory against a Bilbao side grateful they were not more soundly beaten.

Barca took the lead after only eight minutes, with Messi predictably at the heart of the move. 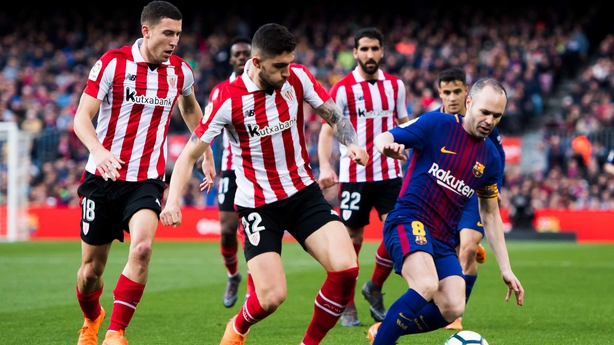 The Argentina forward, fresh from his two goals in the midweek Champions League win over Chelsea, danced his way into the area before laying the ball off to Jordi Alba.

Alba reached the byline before cutting the ball back to Alcacer, who was left with a simple side-foot finish past Bilbao keeper Kepa Arrizabalaga.

Messi had already had a couple of sighters when he got on the scoresheet on the half-hour mark.

Ousmane Dembele picked out his strike partner, who had been left unmarked lurking on the edge of the penalty area, and Messi punished the visitors by drilling the ball unerringly into the bottom corner.

In the early kick-off Sevilla were surprise 2-1 losers at Leganes.

The side who eliminated Manchester United from the Champions League in midweek fell behind to goals from Unai Bustinza and Javier Eraso.

Sevilla lost midfielder Pablo Sarabia to a red card before Miguel Layun hit their consolation in the 90th minute.