Tottenham Hotspur's Christian Eriksen scored twice in a 3-0 victory at Swansea City as the north London club breezed into the FA Cup semi-finals.

The Dane's exquisite left-foot strike put Spurs in front after 11 minutes in a one-sided tie at the Liberty Stadium.

Erik Lamela buried a right-foot shot past Swansea's Swedish keeper Kristoffer Nordfeldt to make it 2-0 before the interval and Eriksen killed off the hosts just past the hour.

Swansea, playing in their first FA Cup quarter-final since 1964, were without cup-tied striker Andre Ayew and his bother Jordan, who was suspended, and offered little resistance as the visitors enjoyed a comfortable 90 minutes.

The home side's only chance came just after halftime when Tottenham's former Swansea keeper Michel Vorm made a fine double save to deny Martin Olsson and Tammy Abraham. 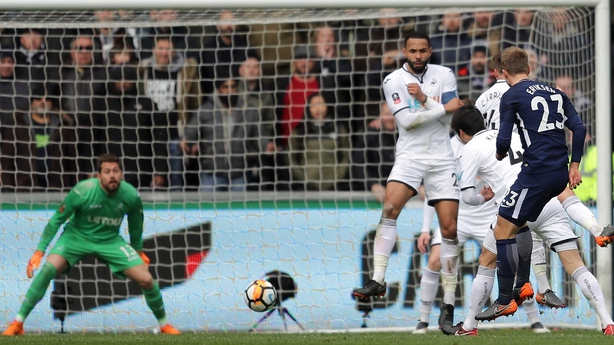 Eight-times FA Cup winners Tottenham are looking to lift the trophy for the first time since 1991, since when they have lost seven semi-finals, most recently to Chelsea last year.

Spurs will effectively enjoy home advantage in the semi-final because Wembley, which stages the semis, has been their temporary home this season while their new stadium is built.