Kevin Toner put through his own net as Shamrock Rovers ran out deserved 1-0 winners over lacklustre St Patrick's Athletic at Tallaght Stadium on Friday night.

The Hoops dominated from start to finish but lacked the cutting edge that former Aston Villa centre-half Toner applied 12 minutes from the end as he turned the ball past his own keeper.

It was rough justice on the defender, who had stood up manfully to a barrage of Rovers pressure for the previous 82 minutes, but the hosts were full value for their derby win.

The opening period matched the pensive mood around the stadium early on with both sides having spells on the ball without causing the other undue worry.

Trevor Clarke – up against his former teammate Simon Madden for the first time – created the first half-chance with a deep cross but it was too high for Dan Carr and Brandon Miele to connect with.

The first shot on target came courtesy of Owen Garvan, the former Crystal Palace midfielder spinning a cross-shot on goal that Tomer Chencinski did well to claw away.

The Canada international was making his first appearance of the season after losing out to Kevin Horgan for the opening five games but was rarely tested by a conservative Pat's side. 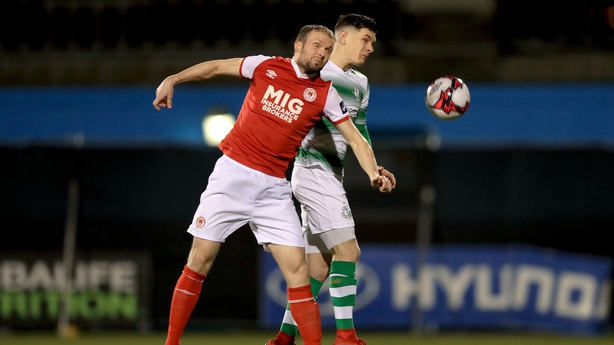 Clarke turned Madden inside out again before firing in a cross that Miele could have done a little better with, though it was tall ask for his to steer his header on goal with the pace on the ball.

Graham Burke was showing some deft touches in midfield for the Hoops but his first attempt on goal proved no trouble for Barry Murphy, who saved comfortably.

Christy Fagan had a quiet first half in the lone striker role, his one shooting opportunity an ambitious one from outside the box that lacked the power or direction to test Chencinski.

Better was Garvan's cross from the left to pick out the in-rushing Conan Byrne but the winger was sufficiently put off by Clarke that his header popped up nicely for Chencinski to claim.

Rovers proved wasteful too, and one chance went abegging on the hour as Miele and Carr both scuffed efforts before Burke curled a low shot millimetres past the post.

Sean Kavanagh went even closer shortly after when he was teed up by Ethan Boyle's centre, but his first-time effort skewed just outside the top corner with Murphy beaten.

The goal finally came with 12 minutes remaining, and it was appropriately scruffy, Toner inadvertently stabbing the ball past his own keeper in dealing with a right-wing cross.

Rovers pushed on to make certain of the points and gave Pat's another scare as Ronan Finn's shot skidded up off the turf and back off Murphy's chest, but Kavanagh couldn't reach the rebound.

Former Hoop James Doona was an unpopular introduction with the home fans as Pat's looked to force the game, but Rovers closed out the final moments without issue.