Arsenal advanced to the quarter-finals of the Europa League with the help of a controversial penalty against AC Milan, as they ran out 3-1 (5-1 agg) winners.

Leading 2-0 from the first leg in Italy, the Gunners were shaken by Hakan Calhanoglu's long-range strike but hit back to win and assure themselves of a spot in the quarter-finals.

Danny Welbeck levelled with just his third goal in 26 games by winning and converting a dubious penalty before heading home from point-blank range after Granit Xhaka's tame strike had put the hosts ahead.

Arsene Wenger's side had fallen at the last-16 stage in their last seven Champions League campaigns but have at least gone one better in this tournament as they won a European knockout tie at home for the first time since seeing off the same opponents here in 2012.

Andre Silva, who scored a last-minute winner for Milan in their Serie A victory at Genoa on Sunday, had a great chance to reduce the arrears inside the opening minute - but the Portugal international could only hit the side-netting when played in.

Arsenal settled after that early scare despite losing captain Laurent Koscielny to an early injury.

Welbeck broke the offside trap but fired straight at Gianluigi Donnarumma as his search for a goal went on.
But it would be Milan who got themselves back in the tie as Calhanoglu fired home from distance.

Arsenal's reply was almost instantaneous, Aaron Ramsey forcing a smart stop out of Donnarumma before Welbeck was awarded a contentious penalty.

The England international got the wrong side of Ricardo Rodriguez and went to ground, with referee Jonas Eriksson pointing to the spot despite minimal, if any, contact. 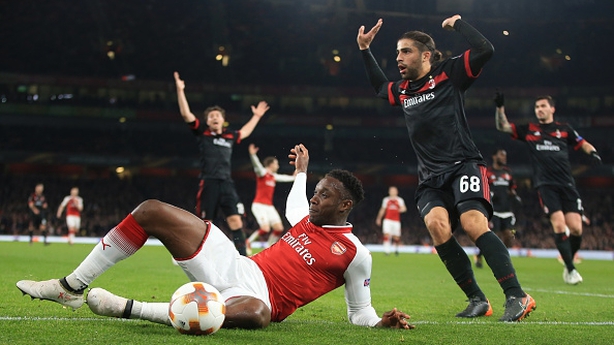 The decision was so soft, almost three-quarters of respondents to a tweet from the official Arsenal Twitter account said they would not have awarded the penalty.

Nevertheless, Welbeck picked himself up to send Donnarumma the wrong way from the spot and restore Arsenal's two-goal advantage in the tie.

The forward was involved again on the stroke of half-time laying back a cross into the path of Henrikh Mkhitaryan, who could only send a diving header wide of the post from close range.

Jack Wilshere, too, came close to killing the tie before the break as he stung the palms of Donnarumma with a 25-yard drive.

Milan boss Gennaro Gattuso, warned by the referee over his demeanour as he continued to prowl the touchline, introduced Nikola Kalinic off the bench, only for the former Blackburn man to head straight at David Ospina when presented with a great chance.

The tie was wrapped up as Xhaka unleashed a tame long-range effort which Donnarumma inexplicably could not keep out, instead pushing the ball into the corner to put Arsenal ahead on the night.

Welbeck then nodded home late on following a smart cross from Wilshere, who celebrated his own England recall with a man of the match display.

This marked a third straight win after a recent run of damaging defeats meant the Europa League is now Arsenal's only chance of silverware and their only realistic route back to the Champions League.

They were far better than Milan over two legs but the likes of Atletico Madrid, Lazio and Sporting Lisbon await in Friday's quarter-final draw.