Both of these Dublin clubs will be looking to bounce after defeats to Derry and Waterford respectively in round three.

The Gypsies kicked off their campaign with a brilliant derby defeat of Shamrock Rovers but a draw at Limerick, and then that loss to the Candystripes, leaves them fifth. Pat's are third from bottom after one win and two losses.

Keith Long (Bohemians): "The extreme weather has disrupted the fixture list and it will have a knock-on effect over the next few weeks with a backlog of games. This will be a test of our squad and our durability but it will be the same for all clubs. We must get on with it."

Liam Buckley (St Pat’s Athletic): "Bohs got off to a great start with a win over Shamrock Rovers and a draw in Limerick. I saw them lose to Derry City last week and they were unlucky to be edged out. Keith Long has put together a good squad and we are expecting a tough game."

St Pat’s: The Saints have been boosted by the return to training of defender Mick Leahy and Republic of Ireland U19 international Thomas Byrne. They do, however,  remain without the services of midfielder Killian Brennan.

With just three games played already, it's too early to say that Bray Wanderers are in trouble but they sit at the bottom of the Premier Division with just one point and face a tricky trip to a Limerick desperate to bounce back from an 8-0 hammering.

That 8-0 defeat came against Dundalk and appeared to come out of the blue after Limerick opened with a victory over Sligo Rovers and managed to hold Bohemians to a draw.

Tommy Barrett (Limerick) There are no easy games. Bray are a good side. They have a lot of very good players," Barrett told the Limerick Leader.

"They are definitely an attacking threat. They have a really good front four, their midfield are solid and they have good defenders as well. There won’t be anything easy."

Limerick: The hosts can welcome Barry Maguire straight into their starting line-up after the defensive midfielder completed a transfer from Dutch side TEC.

It's early in the campaign, but Waterford will be happy with their start that sees them second in the table after two wins from three. They make the long journey to The Showgrounds to take on a Sligo side who will be disappointed at the manner in which they conceded against Cork last Monday week.

Gerard Lyttle (Sligo Rovers): "We handed the game to Cork with the mistakes we made that night because you will always lose matches when you give teams like Cork goals on a plate.

"We showed in the second half that we can get at teams, we can create chances and obviously that’s what we want again. We sat off Cork a bit in the first half and played with pressure on us. I want the team to go out from the start and play with passion, freedom and go out and enjoy and we simply didn’t do it.

"We want to start the game with an intensity on Friday and get the best out of ourselves because I think we can give every team in the league problems and that was the biggest disappointment of the defeat to Cork. There are signs of what we can do but we have to show it."

Alan Reynolds (Waterford FC): "Sligo will be a very difficult game for us because they are a very good side.We have trained well this week after a few days off and we’re looking forward to the game.

"It’s going to be tough at the Showgrounds but I think that we go into the game with a confidence about ourselves and we have players that are just etching to get playing again after missing a couple of games.

"We played well against St. Pat’s but anyone that knows me will know that there’s things from that game that we need to improve on. We were excellent at times but I’d like to see us do it for long periods in the game but it’s all about winning so hopefully we can do that."

Sligo Rovers: Rhys McCabe is suspended due to a one-game ban from the red card against Cork City, while Ally Roy is doubtful with a bruised foot.

Waterford FC: Dean O’Halloran and Faysel Kasmi are still recovering from ankle knocks picked up in recent weeks and are both doubtful to make it in time for Friday’s game. 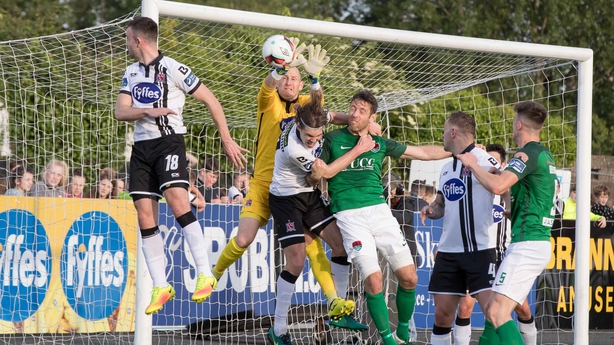 The two best teams in the country in recent seasons renew their rivalry at Oriel Park. Three games in and Cork are already four points clear of their rivals and were convincing 4-1 winners in Sligo the last day.

After opening up with draws, Dundalk hit Limerick for eight just before the snow came.

Stephen Kenny (Dundalk): "These are the games that we want to be involved in. They have been very close games between ourselves and Cork City for the past couple of years so it’s going to be another tight game.

"It’s going to be a full house here on Friday. We have great support behind us and we love playing here. We will be going out to try and win the game so hopefully we can get the three points and carry it into the next week. Almost everyone is back fit now and we have a very strong squad. You look at the squad and we have good players everywhere."

John Caulfield (Cork City): "In some ways, it was good (the break), because there was a bit of an overload in the first couple of weeks, so a few days off were welcome and gave guys a chance to recover. It probably dragged on a bit, but everyone was affected, so it was the same for everyone. We are back in since Sunday and back on track again."

"The league is a marathon and this is the fourth game, so there is a long way to go and Friday’s game won’t determine anything. I think Dundalk will be back to basics; Gartland and O’Donnell didn’t play in the President’s Cup, but they are both back and you would expect they might come in. Hoban has a couple of games under his belt, so I expect they will be back to a familiar staring XI."

Dundalk: John Mountney is out with a knee injury. Brian Gartland and Stephen O’Donnell are available for selection once again after they came through the friendly encounter with Warrenpoint Town unscathed.

Cork City: Josh O’Hanlon is back in training, but this game is expected to come too soon for him, while Johnny Dunleavy is still working his way back to full fitness.

Both teams enter this game on the back of wins to finally kickstart their respective seasons. The Hoops put six past Bray, while the Candystripes gained a priceless victory over Bohemians at Dalymount.

Stephen Bradley (Shamrock Rovers): "I don't think Bray was our best performance overall, we've lost games here and played better. What was pleasing for me was last year when we had teams there ready to be beaten 3 or 4-0 we didn't take it and we ended up winning 1-0 and having a nervous last five minutes.

"Whereas on Monday we recognised that we had a team that were on the ropes and we went and punished them and really hurt them and we looked like we wanted to score more than six. That's what you have to do, you have to be ruthless so that showed a maturity in the group. And our back five looked hungry not to concede a goal."

Kenny Shiels (Derry City):  "Every game you prepare for you are trying to win, but there's more than one way to winning," he added.

"We want to give Shamrock Rovers a game although we know they have great players throughout their team."

"We try as hard as we can to entertain, attack and defend but with some opponents you have to work more on one particular category and Shamrock Rovers are one of those teams." (via BBC NI)

Shamrock Rovers: Joey O'Brien is in full training so it's a full squad other than Greg Bolger.

Derry City: Conor McDermott is an injury doubt while Chris Turner, David Hopkirk, Gavin Peers and Armin Aganovic are ruled out by the Candystripes.