Ronan Curtis' strike and a penalty save from captain Ger Doherty breathed life into Derry City’s season at Dalymount Park as the visitors secured their first points of the campaign.

Having opened with two defeats in the SSE Airtricity League Premier Division, it provided the ideal morale boost Candystripes' manager Kenny Shiels would have wanted ahead of Friday’s first home clash of the season against Dundalk at the newly renovated Brandywell.

It’s also now a remarkable eight wins from eight against Bohemians for Shiels since taking charge of Derry.

With a dusting of snow on the pitch from pre-match flurries, both sides struggled to impose their game early on in the bitterly cold conditions.

Eoghan Stokes finally brought some life to it on 13 minutes, following an interchange of passes with Keith Buckley, with a sublime through ball for Keith Ward. Ward's shot was blocked by alert debutant defender Niall Logue.

Further good defending was needed to rescue Derry five minutes late after Ward put Kevin Devaney away on the right to cross.

Stokes showed good control to trap the ball and turn in the area. Derry had Eoin Toal to thank for getting in a telling block to avert the danger.

The pressure on the visitors’ defence was relieved on 23 minutes as Aaron McEneff put Rory Patterson away on the counter but the striker’s attempted cross was comfortably dealt with by Bohemians. 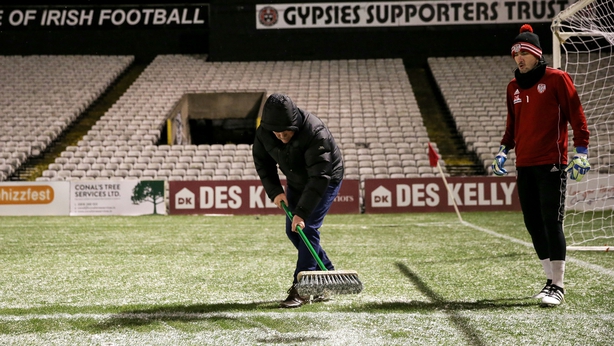 Four minutes later, Derry should really have been in front.

Again McEneff’s vision caught the home defence flat with a terrific through ball for Curtis. Shane Supple showed why he’s regarded as one of the best keepers in the league with a brilliant save with his feet.

Remarkably, Doherty would better that at the other end with the stop of the half six minutes before the interval.

Kavanagh’s exquisite ball in behind found the run of Stokes but the Derry skipper spread himself well to parry away the striker’s rising shot.

Minutes into the second half, Doherty was happy to see Kavanagh lob over the bar after Supple’s kick-out put the Gypsies’ winger in over the top.

Derry continued to have their chances on the counter, and none better than on 55 minutes.

This time, Rory Hale sent Patterson away, but the former Northern Ireland international scuffed his hurried shot feebly wide with only Supple to beat.

Supple would be beaten on 61 minutes, though, as Derry got what proved their winner against the run of play.

Curtis, who initially won the corner, was there in the area to drill low though a forest of legs when Bohemians failed to clear Nicky Low’s delivery.

Bohemians brought on JJ Lunney and went two up front as they chased the game.

Stokes had a shot blocked in a right scramble before Devaney hooked a chance narrowly over the bar seven minutes from time.

A foul by substitute Conor McDermott on Devaney then presented Bohemians with a chance to equalise from an 85th minute penalty.

But Doherty ensured all three points went north when diving low to his right to push away Stokes’ spot kick.

Derry were then inches from adding to their winning margin when left-back Ben Doherty cracked a shot off the bar in stoppage time.