Romelu Lukaku inspired Manchester United to a comeback win against former club Chelsea as Jose Mourinho got the better of Antonio Conte.

Sunday's Premier League encounter pitted these managers against each another for the first time since last month's ugly public spat, but an engaging duel between the top-four rivals meant eyes did not stray towards the touchline.

Willian's fine breakaway goal had Conte's Chelsea on course for a memorable victory, only for Lukaku to level against his former club and then cross for substitute Jesse Lingard to secure United a 2-1 triumph which propelled them back into second place.

Mourinho will no doubt have been pleased by the resolve his side showed against the club he led to record success, especially as Lukaku proved himself in a big game that the Red Devils had begun sloppily.

Alvaro Morata hit the woodwork from close range early into a match that was 32 minutes old when Willian clinically ended a break he had played a key role in.

The hosts quickly levelled as Lukaku smartly scored his first league goal for United against a team currently in the top eight, with only a fine save from Thibaut Courtois preventing his afternoon getting better.

However, the Belgium striker continued to plug away against the side he nearly rejoined in the summer, sending in a cross for Lingard to head United to victory. 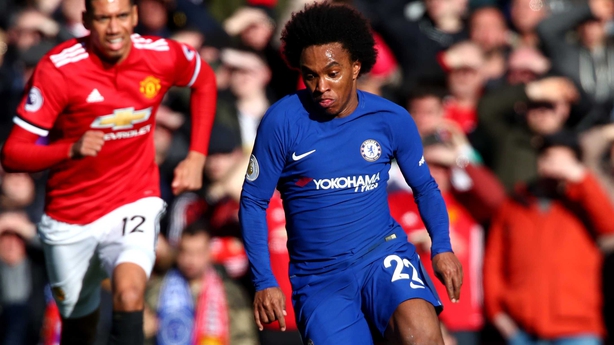 Mourinho and Conte shared a cursory handshake at full-time of a match that had seen both prowl the touchlines throughout.

The Italian saw his side start the better as Marcos Alonso met a cross-field pass with an exceptional volleyed cross to Morata, whose fizzing first-time strike rattled the crossbar.

It was a shot across the bows that jolted United into life defensively, with inexperienced Scott McTominay tasked with sticking close to Hazard.

Chelsea dominated the play against the subdued hosts, who took 28 minutes to muster a shot on Courtois' goal as Alexis Sanchez got away a tame effort.

But just as the home side began to click into gear, Conte's side broke with speed and skill.

The Brazilian collected the ball just outside his own box and surged ahead, passing to Hazard and then collecting a superb return ball before slamming home.

The power of Willian's shot saw De Gea uncharacteristically beaten and Alonso quickly threatened to add to it.
United were looking sloppy but they rallied rather than unravelled, levelling within seven minutes.

Lukaku, Nemanja Matic, Sanchez and Anthony Martial were involved intricate short passes in a tight area, before the former Chelsea striker directed into the bottom-left corner from close range. 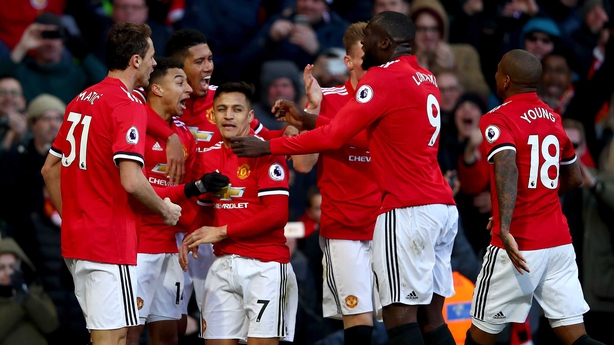 Morata directed an attempt at De Gea's goal before half-time and shortly afterwards he wasted an opportunity after Chris Smalling's wild lunge allowed him through.

De Gea was not looking his assured self, with the sun playing its part as he unsteadily denied Danny Drinkwater and Willian.

Sanchez dragged wide at the other end before wriggling free to clip in a cross that Lukaku met acrobatically, only for international team-mate Courtois to deny him.

Just 15 minutes from time, however, the Belgium striker helped his side find a way past the Chelsea goalkeeper.

Lukaku kept his composure under pressure and sent over a fine cross for substitute Lingard to head home.

Old Trafford erupted in delight and minutes later did so in relief as De Gea denied Willian's near-post effort.
Matic and Antonio Rudiger came together as tempers frayed as the match concluded, with Morata seeing an attempt from an acute angle ruled out.