Bayern Munich, helped by two trademark Thomas Muller goals and two from Robert Lewandowski, romped to victory over Besiktas in their Champions League tie on Tuesday after the Turkish champions played nearly the whole match with 10 men.

Besiktas defender Domagoj Vida was given a straight red card for tripping Lewandowski outside the penalty area in the 16th minute, the defining moment in the round of 16, first leg tie.

Muller, inelegant yet always effective, broke the deadlock with a miskick two minutes before halftime to break Besiktas's resistance.

Kingsley Coman and Mueller added two more before Lewandowski helped himself to a late brace, virtually assuring the Bavarians of a seventh successive quarter-final appearance. 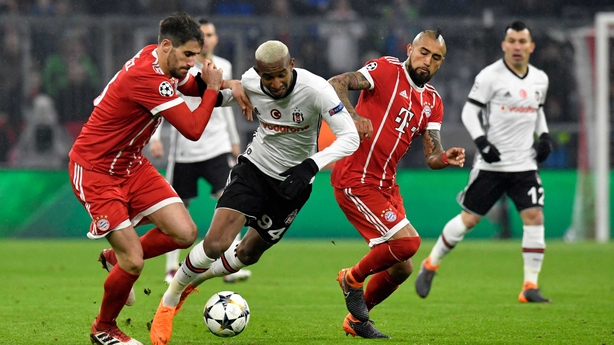 Besiktas won all three away games in the group stage and came with the clear intention of attacking Bayern but their plans were torpedoed by Vida's red card.

A poor pass from Atiba Hutchinson went straight to Lewandowski, who burst past Vida and was tripped as he ran at goal with only goalkeeper Fabri to beat.

Besiktas could still have snatched a priceless goal minutes later when Vagner Love got past two Bayern defenders to give himself a clear shot on goal but his effort was high and wide.

Bayern then laid siege to Besiktas and Fabri denied them the opening goal with a superb one-handed save at point-blank range to turn away Mats Hummels's header.

Having survived another scare when Ricardo Quaresma burst down the right and forced Sven Ulreich to save at his near post, Bayern broke the deadlock two minutes before halftime. 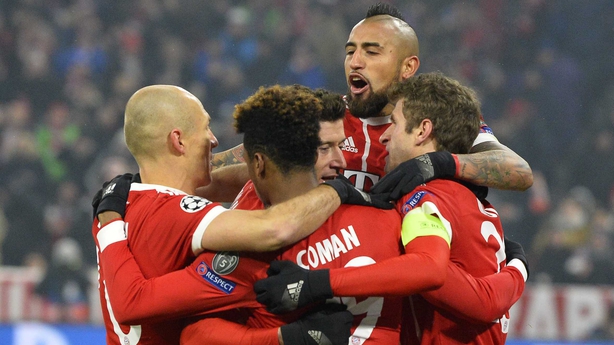 Coman got to the byline and crossed, Alaba touched it on and the ball fell to Mueller who turned, failed to make proper contact but poked it home.

It was a typically scrappy effort from a player once described on the German Football Federation's Twitter feed as having the elegance of a swan on ice skates.

There was an air of inevitability about the second half as Bayern took complete control.

Coman sidefooted in from Lewandowski's pass in the 53rd minute before Mueller struck again in the 66th, this time sticking his leg out to divert Joshua Kimmich's cross past Fabri.

Lewandowski got in on the act by snapping up a rebound in the 79th minute, before Muller set up the Pole's second and Bayern's fifth.