Boss Brendan Rodgers claims Celtic would upset the odds by knocking Zenit St Petersburg out of the Europa League.

Celtic take on the big-spending Russian side - who twice beat Dundalk when they met in the group stages of this competition over a year ago - in the first leg of their last-32 clash at Parkhead on Thursday night with the return game a week later.

Zenit won five and drew one of their six Europa League group games to reach the knockout stages whereas the Scottish champions dropped down from the Champions League by finishing third behind European superpowers Paris St Germain and Bayern Munich with just one win in six.

"In terms of the standings of both teams across Europe, it would be fair to say that they would obviously be favourites," said Rodgers.

"People within football will probably look at it and see Zenit as the team who would be favourites to go through.

"We have to be realistic as always. We know where we stand in relation to some of the superpowers and finances at this level.

"There are some great teams in the Europa League and the nature of the competition means it is very difficult for us, and like the Champions League, we are going to be tested to the limits in terms of where we are at in comparison to the other teams.

"But it is a really exciting challenge.

"We have got our reward by getting through the group stage and hopefully we can perform very well and get a result."

Rodgers, however, does not believe the Hoops go into the tie pressure-free.

The former Swansea and Liverpool boss said: "They have won five out of six games in the Europa League qualification and will come into this game as favourites with the quality they have.

"But there will always be pressure when you are a Celtic manager or player, despite the disparity in finances.

"You always want to do well, and do well for your supporters and of course we want to get through to the last 16. 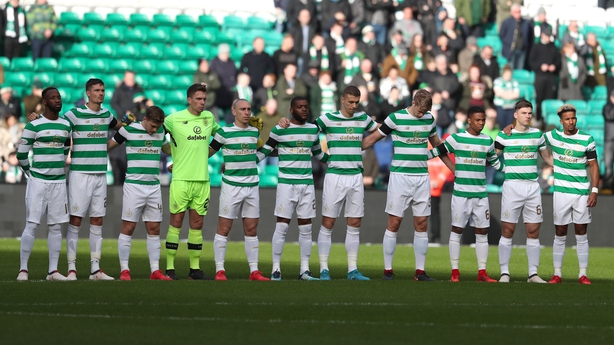 "So we will always put pressure on ourselves but I have always said it is a privilege when you work at a club like Celtic and you have to do your very best."

The Northern Irishman insists it would take "something magical" to prevent continual European struggle for the champions of Scotland.

"It is always going to be difficult for Scottish teams," he said.

"First and foremost, for us, our task here is to always win the league to gain entry into  qualification for Champions League and then that allows you to have greater funds in order to build your club.

"So unless something magical happens and there is a huge financial input to the club then of course it will always be a challenge for us.

"But it is still one we have to enjoy.

"It shouldn't stop any hope of us always wanting to cause an upset.

"We have had some tough games in Europe over the last couple of season and we wouldn't swap them for anything."