Raheem Sterling opened the scoring for the hosts, converting Kevin De Bruyne's teasing cross in the third minute before Jamie Vardy equalised against the run of play with a slight deflection beating Ederson.

City started the second period in rapid fashion, Aguero scoring twice within five minutes with both goals assisted by the brilliant De Bruyne.

The Argentine completed his treble in the 77th minute, capitalising on Kasper Schmeichel's error and lifting a sublime finish over the Dane to become the fourth player to score at least 20 Premier League goals in four successive seasons.

Aguero saved the best for last, though, with a sensational dipping shot that crashed in off the underside of the crossbar.

Leicester's want-away attacker Riyad Mahrez was named on the bench after returning to training on Friday and he could only watch as City raced out of the blocks with Sterling making immediate amends for a glaring miss in the draw at Burnley last week.

The England international contrived to miss from three yards as City dropped two points at Turf Moor but this time made no mistake from a similar distance after just three minutes.

The ever-impressive De Bruyne curled in a dangerous low ball behind the defence and Sterling turned home.
From there it seemed City would assert full control as they dominated possession but they struggled to create clear-cut chances.

Aguero threatened in the area but showed too much of the ball to Christian Fuchs and Leicester, having already warned City of their intention to counter, quickly broke upfield.

Nicolas Otamendi did win the ball back but then lost it again with a sloppy pass and Vardy raced clear, evading a sliding challenge from Ilkay Gundogan in the process.

As he reached the edge of the area he connected with a firm shot and a slight deflection off Aymeric Laporte took it flying past Ederson for an equaliser.

City responded with Bernardo Silva forcing Kasper Schmeichel into action and Fernandinho also shooting at the goalkeeper. De Bruyne brought an even better save out of him after cutting in from the left.

Sterling went close to a second just before the break as he beat Schmeichel only to be denied by a fine block from Aleksandar Dragovic.

City just needed to start applying the final touches and they did so early in the second period, ruthlessly exposing Foxes boss Claude Puel's decision to switch from a back three to back four. 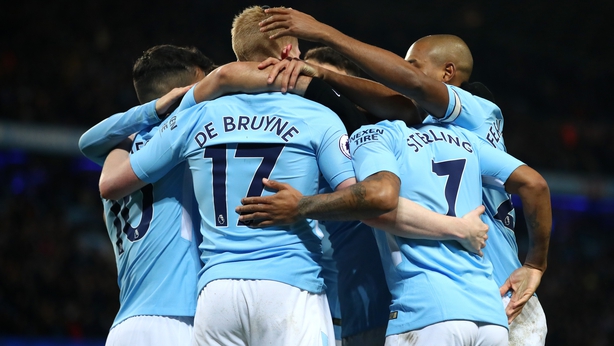 De Bruyne was again at the heart of their good work, exchanging passes with Sterling and picking out Aguero at the far post for a simple tap-in after 48 minutes.

De Bruyne set up another for Aguero just five minutes later, this time capitalising on a poor clearance from Schmeichel to feed the Argentinian.

That put the hosts in firm command but Puel responded by sending on, to a mixed reception, Mahrez and, to a good hand, former City striker Kelechi Iheanacho.

It was to no avail and Aguero wrapped up victory with two more. He first seized on another bad clearance by Schmeichel to chip home for his hat-trick and then thumped in a long-range shot off the bar in the last minute.