Liverpool manager Jurgen Klopp admits he is being cautious with Adam Lallana's return to the side after the midfielder's short-lived comebacks so far.

The England international missed the opening four months of the campaign with a thigh injury sustained in pre-season and eventually made his first appearance on November 25.

He managed 221 minutes of action over seven matches as the problem flared up on two occasions but played just over an hour before getting sent off in the under-23s defeat to Tottenham on Monday.

Klopp is considering including him in the squad for Sunday's trip to his former club Southampton but will not press the 29-year-old back into service too early.

"But maybe I can sleep twice before we play Southampton so maybe I will change my mind on this. We will see.

"He is in good shape, really quick, he looks fresh and looks good and you think 'What can we do with him?' but we did it twice now.

"I don't think it was too early when we did it, but it happened twice so we need to settle a little and then use Adam. 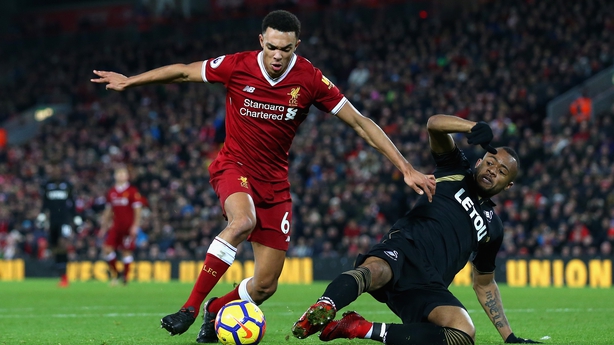 One player expected to start on Sunday is Trent Alexander-Arnold.

The 19-year-old has been rotated at right-back with Joe Gomez this season but with the latter struggling to be fit from a knee injury the academy graduate is set for the nod again.

"We probably have the two youngest full-backs in the league pretty much and now Joe is out," Klopp added.

"So it is really good that we have Trent. He developed a lot, like Joe did - different players obviously but both can play the position.

"It's good for him that he doesn't have to play every week. He is still a young boy. He improved a lot, especially in training, in the last few months.

"In the beginning he trained a little bit like a kid, ups and downs. (Now) it's a consistent high level, good attitude and he can show his skills.

"The football part of the position seems to be pretty easy for him; he is really quick, he has a fantastic right foot, the left foot is not too bad, really good crosses, football smart, a good view for spaces. That's all good.
"But (he has) a lot to learn of course. Hopefully he can deliver again."