If Wes Hoolahan had retired from international soccer at the same age as Paul Scholes, he'd have walked away with a single cap to his name.

Scholes was just 29 years old when he got fed up playing with "individuals who are after personal glory... selfish people". Aka 'The Golden Generation'.

Hoolahan made his Ireland bow aged 25, coming on a substitute in the 1-0 friendly win against Colombia at Craven Cottage, but he was 30 before the call came again.

Giovanni Trapattoni brought the former Shelbourne schemer in from the cold and gave him a runout against Greece.

Trap simply didn't trust Wes enough to put him in the engine room with any regularity though and was more comfortable setting up with dogged warriors like Paul Green and Glenn Whelan.

It left the Dubliner on the periphery, and although many will argue that Martin O'Neill should have used Hoolahan more than he did, it was under the Derryman that he finally emerged as a national treasure.

It's extremely rare to see a player improve in his 30s, as Scholes arguably did with Manchester United. Let's be thankful Hoolahan stuck around. 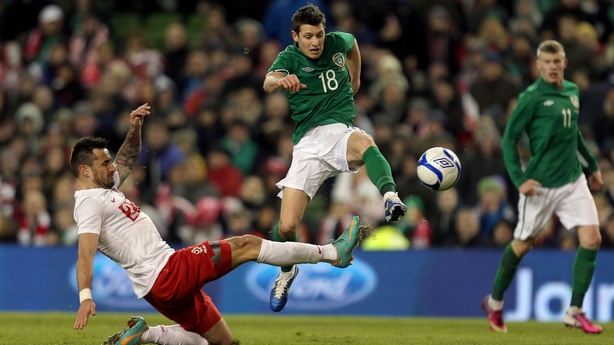 Hoolahan had left his 20s before he struck his first goal for the Republic of Ireland. In a running theme throughout his career in green, he rose from the bench to decorate a turgid friendly with a moment of quality. A fresh-faced Jeff Hendrick dropped a peach of a ball onto his team-mate's chest and Hoolahan killed it before steering a terrific volley past Wojciech Szczesny. He was left on the bench for the following month's crucial World Cup qualifiers against Sweden and Austria, two draws which fatally damaged Trap's hopes of making it to Brazil, and ultimately led to the end of his tenure.

Oh the ecstasy. Ireland were humiliated at Euro 2012 under Trapattoni, losing all of their group games and coming home early as the worst side at a high-quality tournament. Four years later, they were a different proposition. O'Neill's men bossed the first 50 minutes of their Group E opener against the Swedes and deservedly led through a gorgeous Hoolahan half-volley. Seamus Coleman's hooked cross gave him the chance to put his name in lights and the Belvo boy took it, brilliantly guiding the bouncing ball past Andreas Isaksson. He only scored three times for Ireland; this one counts double.

3 The ball to Brady

The Goal of the Year goes to Robbie Brady for this famous header against Italy in Lille! #FAIAwards pic.twitter.com/xGSUmEymaR

Hoolahan was, criminally, left out of the squad for Euro 2012, but he stamped his class all over France four years later, following up the goal against the Swedes with a superb assist for Robbie Brady's memorable winner in Lille. Just before he swung in this left-footed peach, he missed a brilliant chance to break the deadlock himself. "I was thinking when it happened, 'Ooh no, what's going to happen at the end'," he said afterwards when reflecting on his missed opportunity. "I just kept my concentration and thought another chance might come or I might be able to create something." Where others would have disappeared, Wes pulled a rabbit from the hat. 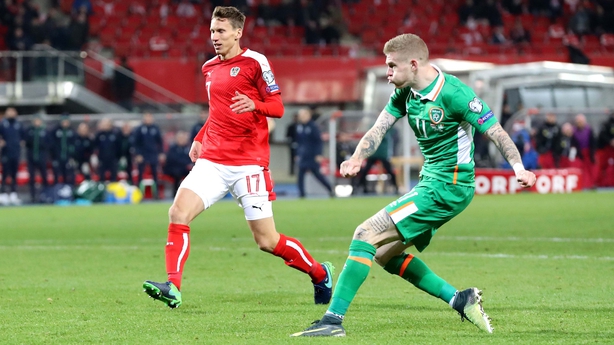 Wes fans constantly banged the drum for him to start every game for Ireland because they longed to see a man in green who didn't treat the ball like a hot cookie. The argument against his inclusion for big matches, on the road particularly, was that games could pass him by and he wasn't effective out of possession. Against Austria at the start of the World Cup 2018 qualification campaign, the doubters were given fuel as Hoolahan struggled to impose his authority, coughing up possession under little pressure on a couple of occasions. And then... he swept a ball into James McClean''s stride that no other Irishman would have seen, let alone executed. The winger slammed his strike to the net and the visitors plundered a 1-0 victory.

5 Even when he's bad he's good

@SportsJOEdotie There she is with the top - Wes a true gent pic.twitter.com/m2Sv0rnTj2

Hoolahan's stock was probably at its highest in Ireland when he wasn't actually playing. Several times his omission coincided with laboured, uninspired team performances. He did play against Georgia in 2015, and was typically bright and clever in a 1-0 win that kept qualification for the 2016 Euros on track. In the warm-up he thumped a wayward shot into the stands, smacking an unfortunate fan with the ball. Wes made amends by handing her his training top and then going on to pull the strings at the Aviva.