Kevin De Bruyne was again the inspiration as Manchester City opened up a 15-point lead at the top of the Premier League with win over West Brom.

City may have pulled out of a deadline day deal for Leicester's Riyad Mahrez but on the field it was business as usual at the Etihad Stadium.

De Bruyne set up Fernandinho for City's opening goal and then added the second himself before a delightful late finish from Sergio Aguero wrapped up the win.

It proved a comfortable evening for record signing Aymeric Laporte to make his debut.

His appearance was a surprise, after his £57 million switch from Athletic Bilbao was confirmed only on Tuesday, but he was given a chance after John Stones fell ill.

West Brom, meanwhile, blooded their high-profile January recruit Daniel Sturridge only as a late substitute and were left three points adrift at the bottom.

City dominated from the outset and it was a wonder they only led 1-0 at half-time, such was their control of possession and the chances they created.

De Bruyne was at the heart of almost every positive move and the Belgian forced an early save from Baggies keeper Ben Foster.

It was no surprise when the opening goal came after 19 minutes with De Bruyne playing Fernandinho in on goal with an inch-perfect pass that took out two defenders. The Brazilian slid home a low, first-time shot.

Opportunities then came with regularity as De Bruyne and Raheem Sterling combined for David Silva to cross but Aguero could not quite get a touch.

That #sharkteam of ours, hey? pic.twitter.com/6EqgtIXxw0

De Bruyne had a trio of further chances himself, first being denied by Foster's feet, then grazing the bar with a ferocious shot, then forcing a better save from the keeper.

Both sides made early substitutions and City will be worried to have seen David Silva hobble off at a time when Leroy Sane and Gabriel Jesus are already sidelined.

The withdrawal of Grzegorz Krychowiak at least gave home fans the chance to give former City midfielder Gareth Barry a good reception.

City started the second half brightly with Ilkay Gundogan playing in Sterling. The England international brilliantly turned inside Craig Dawson but then curled wide of the far post.

Aguero tried his luck with a cheeky backheel but Foster was alert, as he also was to a curling effort from Bernardo Silva. 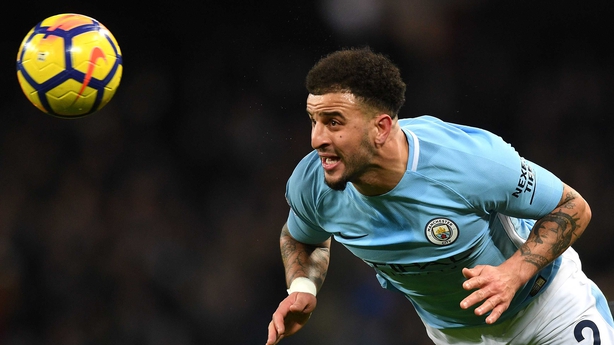 De Bruyne doubled the lead after 68 minutes, despite a cynical attempt by James McClean to cut him down as he burst clear.

He skipped the challenge and exchanged passes with Sterling before tucking home.
McClean was booked for his attempted foul and might have seen red after bundling Fernandinho over soon after.

He escaped further punishment and West Brom were thankful to Foster for turning away Kyle Walker's free-kick and a long-range effort from De Bruyne.

Foster saved again with his feet from Brahim Diaz and Bernardo Silva hit the side-netting.

West Brom were well beaten but they still left their mark with Matt Phillips booked for a late tackle on Brahim Diaz.

Aguero applied the finishing touch to City's win with a deft flick over Foster in the last minute.