Barcelona rode further away from their crumbling title rivals on Sunday as Lionel Messi and Luis Suarez scored twice each in a 5-0 thrashing of Real Betis which opened up an 11-point gap at the top of the La Liga standings.

Ivan Rakitic started the ball rolling as the hour-mark approached while Messi and Suarez joined him on the scoresheet within the next 10 minutes.

The Argentina international saved his best for the last 10 minutes, adding a superb individual effort and then setting up Suarez for his second in similar fashion to help Barca claim a sixth successive league win courtesy of a 5-0 romp.

Betis gave as good as they got for long periods, but their hopes of adding to a return of three LaLiga victories in four were dashed in devastating style on a night when Ernesto Valverde's men belatedly found their cutting edge at the Benito Villamarin Stadium.

A tight first half started in promising fashion for the home side as Andres Guardado whistled a left-footed effort just wide of the far post with Barca keeper Marc-Andre ter Stegen at full-stretch.

In a frenetic opening, an off-balance Suarez blazed over with the visitors stepping up the tempo, and keeper Antonio Adan had to make his first save from Rakitic's 27th-minute drive.

With clear-cut chances at a premium, Messi fired into the side-netting from a Suarez pass four minutes later with neither side able to find the required quality in the final third to make the breakthrough. 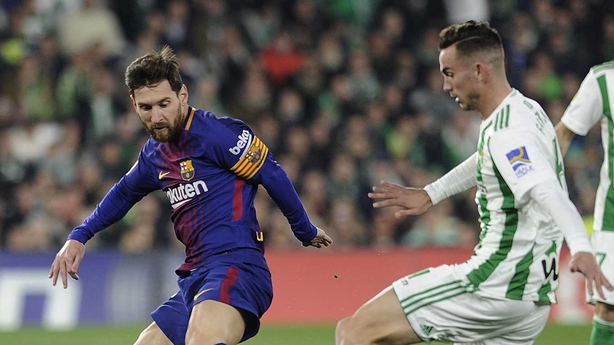 Messi's fortunes took a turn for the worse two minutes before the break when, as he fell after being hauled to the ground by Fabian Ruiz Pena, the midfielder accidentally caught him in the back of the head with his knee.

Sergio Busquets tried his luck from long range in stoppage time, but once again Adan saved comfortably to ensure the sides remained locked together at half-time.

Betis resumed brightly to put the Catalans under early pressure and Ter Stegen needed two attempts to claim Fabian's 58th-minute shot at his near post, but they fell behind seconds later after Barca mounted a pacy counter-attack.

Suarez's superbly-timed pass on halfway sent Rakitic clear of the Betis rearguard and he drew Adan before slotting the ball underneath him to open the scoring.

It was 2-0 within five minutes when Busquets robbed Fabian and slid the ball into Messi's path for the striker to beat Adan emphatically.

Defender Zouhair Feddal and Suarez were both booked after going head to head following a difference of opinion, but the Uruguay international's mood improved significantly when he volleyed Rakitic's 69th-minute cross into the bottom corner.

The implosion continued with 10 minutes remaining when Feddal surrendered possession to allow Messi to dance his way through the home defence before beating Adan for a second time, and repeated the feat on the stroke of the final whistle to allow Suarez to blast home his second of the game.