Sergio Aguero tormented Newcastle once again as Premier League leaders Manchester City got back to winning ways at the Etihad Stadium.

The Argentinian, who scored five in a game against the Magpies in 2015, hit a hat-trick as City bounced back from last week's first league loss of the season at Liverpool.

Jacob Murphy briefly gave Newcastle hope of snatching a draw by reducing the arrears to 2-1 after 67 minutes, but Aguero settled the game with his third seven minutes from time.

His first had come with a glancing header before the break and his second from the penalty spot after Raheem Sterling was felled.

It was a deserved victory for City, who met a Newcastle side only slightly more attack-minded than the one they met at St James' Park in December. The win sees Pep Guardiola restore their 12-point advantage at the summit of the Premier League. 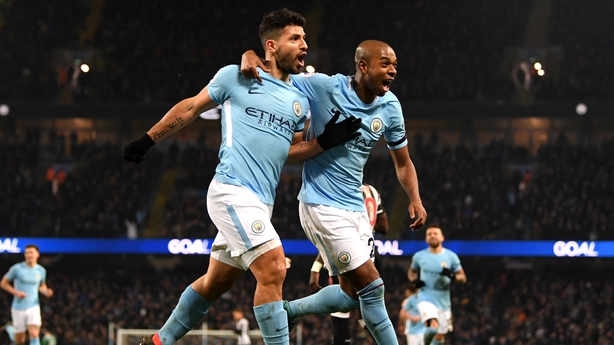 Despite that, City were caught out early on when a quickly taken Jonjo Shelvey free-kick allowed Christian Atsu to whip a cross into the box.

Once on the ball, City were far more composed and it was only a matter of time before the chances started to come.

John Stones side-footed wide from a David Silva cut-back and Sterling rifled the ball into the net only to be flagged offside. Sterling also cut inside to shoot straight at Karl Darlow before the keeper parried another effort from Silva.

City's breakthrough finally came in the 34th minute when Aguero rose to deflect in a fine cross from Kevin De Bruyne. So fine was Aguero's contact that initially there were some suggestions De Bruyne's deep ball from the left may have gone straight in but replays showed the faintest of glances.

City carried their momentum into the second half and Aguero might have had a second soon after the restart had Isaac Hayden not cut out a dangerous ball from Kyle Walker.

But the Argentinian did not have long to wait, getting his chance form the spot after Sterling was bundled over by Javier Manquillo just after the hour.

Aguero made no mistake but it was not enough to kill off Newcastle.

Within moments the visitors were back in the game as Clark seized on a mistake by Nicolas Otamendi and released Murphy with a precise pass. Murphy raced clear of Zinchenko and calmly finished with a neat dink over Ederson.

That gave the Magpies hope and they caused alarm in the City box as Mohamed Diame weaved his way through the defence and tested Ederson with a firm shot. The Brazilian needed to scramble to deny Murphy from the rebound.

In possession, however, City remained a different proposition and Sterling almost scored as Darlow pushed a shot onto the post.

Typically, it was Aguero who had the final say, completing his hat-trick with a fine turn and shot after a brilliant weaving run from Leroy Sane.