Jordon Ibe's first Premier League goal for Bournemouth condemned Arsenal to a 2-1 loss on the south coast, with Alexis Sanchez conspicuous by his absence.

Ibe's first strike for the Cherries in 46 league appearances sunk the Gunners, who leaked two goals in five minutes in this turnaround defeat.

Callum Wilson's third goal in four league games had Bournemouth level after Hector Bellerin handed the visitors a lead they could only squander.

The defeat, and its manner, proved another blow to Arsene Wenger, with the Arsenal boss now resigned to losing key attacker Sanchez in the January transfer window.

Chile hitman Sanchez did not even travel to the south coast, with Wenger telling Sky Sports before kick-off "we left him at home because of the situation". 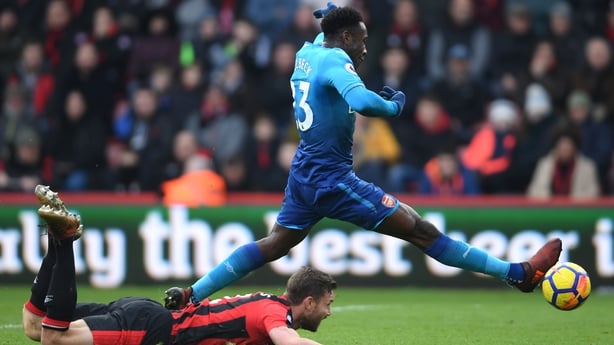 Manchester United appear ready to pip neighbours Manchester City to the 29-year-old's signature, with Arsenal already having confirmed he will not sign an extension to his Emirates Stadium contract that expires in the summer.

How Arsenal missed Sanchez's incision as they left behind what should have proved a regulation win. Now their prize asset's Gunners career may well end on 60 goals and 25 assists in 122 Premier League appearances.

Jack Wilshere's masterful performance against the side he represented with aplomb on loan last season all wound up for nought as Wilson and Ibe pinched the Cherries a priceless victory.

Arsenal slipped to five games without a win in all competitions on a frustrating afternoon for the north Londoners.

Neither side boasted the requisite rapier edge to break the deadlock come the interval. Ainsley Maitland-Niles came closest, whipping the ball against the bar. But the Arsenal full-back endured a roasting defensively as Ibe had his way.

Asmir Begovic emerged one of few men in credit at the break, palming away Alex Iwobi's deflected strike and later denying Danny Welbeck with the forward clean through on goal. 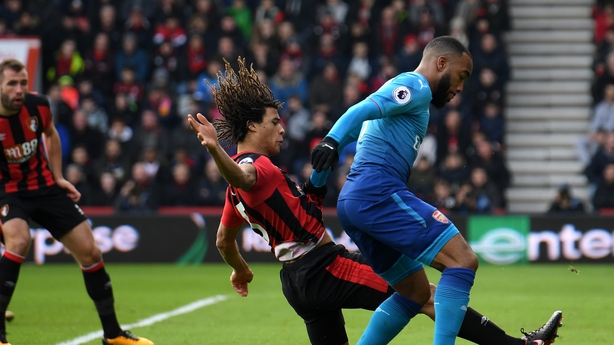 Referee Kevin Friend hardly covered himself in glory in a muddled first half either, booking Dan Gosling for a dive after Shkodran Mustafi had clearly made contact.

The rebound fell to Fraser, only for Calum Chambers to conjure a fine sliding block. Arsenal's renewed purpose after the break yielded quick dividend, Iwobi feeding Bellerin and the Spain full-back drilling past the luckless Begovic.

Just when Arsenal looked to dominate possession and coast to the win however, they switched off and were duly punished.

Lys Mousset flicked a return pass to Fraser, who whipped in a low early cross and Wilson nipped ahead of the onrushing Cech to level for the Cherries.

A mere five minutes later, the Gunners trailed. Wilson received Adam Smith's lofted ball, turned, laid off to Ibe, and the ex-Liverpool man blasted home what turned out to be the decisive goal.