Arsene Wenger lost an FA Cup third-round tie for the first time as holders Arsenal crashed out against Nottingham Forest in an action-packed clash at the City Ground.

Wenger has become the competition's most successful manager, winning it seven times since taking charge of the Gunners in 1996, but the country's longest-serving boss was undone by Forest caretaker manger Gary Brazil on Sunday.

Eric Lichaj scored twice either side of Per Mertesacker's equaliser before penalties from Ben Brereton and Kieran Dowell sandwiched Danny Welbeck's goal in a 4-2 win for the Championship side.

Wenger's influence on matters was reduced as he watched from the stands. The Frenchman served the first of a three-match touchline ban after being hit with a misconduct charge and a £40,000 fine by the FA for his recent, and very public, criticism of referees. 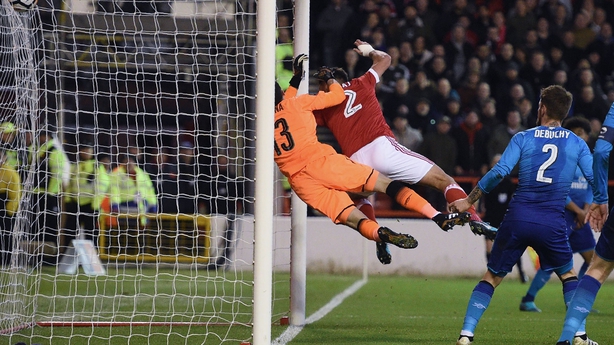 He made nine changes from the team that started the midweek Premier League draw with Chelsea, with just Rob Holding and Ainsley Maitland-Niles keeping their places in the team, and Wenger saw his side lack fluency early on as Forest started well.

Brereton caused the visiting defence all sorts of problems throughout with his pace and movement. The 18-year-old twice raced clear down the left early on, forcing a save from David Ospina and then creating an opportunity which saw Matty Cash denied by a good fingertip stop from the Colombian.

However, Ospina could do little to stop Lichaj scoring shortly afterwards, after being left horribly exposed by his defenders. Dowell whipped in a free-kick from the right byline and Lichaj headed the ball in from a yard out in front of the goalkeeper.

The lead did not last long, though, as Mertesacker poked home the equaliser, reacting quickest after his initial header from Theo Walcott's free-kick had struck the post.

Brereton brought two more good saves from Ospina before Lichaj struck again just before half-time, sending a right-footed volley into the top corner of the net from the edge of the penalty area. 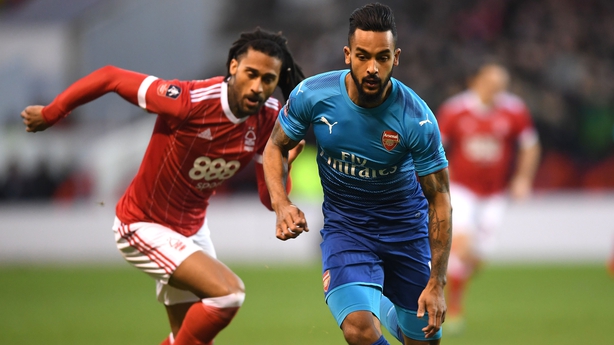 Arsenal needed to improve and they began the second half with conviction, with Reiss Nelson and Maitland-Niles more prominent in the wide positions. A few set-pieces aside, Forest were never really troubled, though.

It was the hosts who created the first real chance after the break when substitute Tyler Walker curled in a cross from the left and Brereton's touch six yards out was diverted narrowly past the post by a covering defender.

Brereton got the goal his performance deserved after 64 minutes, tucking away the penalty after Holding had brought down Cash.

Jordan Smith had had little to do but the Forest goalkeeper preserved his side's cushion with a fine save to deny substitute Eddie Nketiah. However, he was at fault 11 minutes from time when he spilled the ball and allowed Welbeck to tap into an empty net.

It looked like there would be a tense finale but Forest were awarded another spot-kick when Mathieu Debuchy tackled Armand Traore, the former Arsenal defender, from behind. This time Dowell took it and he was fortunate to see his effort go below the crossbar after slipping at the point of contact. 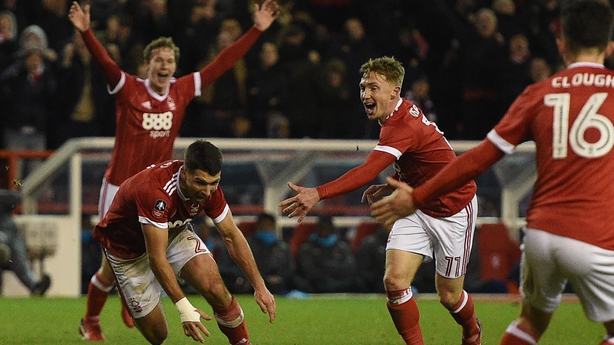 That was not the end of the drama, though. Arsenal players claimed Dowell had made contact with the ball twice, kicking it against his standing foot. Referee Jon Moss consulted his assistant but decided the goal should stand.

Forest finished the match with 10 men as Joe Worrall was shown a straight red card in the final minute for a late challenge on Chuba Akpom, but that did not dampen the home celebrations at the final whistle.