Wimbledon's Jimmy Abdou hit the crossbar with a curling first-half effort and Spurs needed 63 nervy minutes at Wembley before finally breaking down their League One opponents.

When they did, however, the floodgates opened, as Kane scored twice in as many minutes before Vertonghen capped a 3-0 victory with a sensational long-range strike.

Mauricio Pochettino's side will now await Monday's fourth round draw as Tottenham edge one step closer to ending their 10-year wait for a major trophy.

Wimbledon, meanwhile, turn their attention back to their relegation fight in the league but they were certainly not embarrassed here as a disciplined defensive display threatened to upset their Premier League opponents for just over an hour.

But, after hitting a record-breaking 39 goals last year, Kane registered his first and second of 2018, before going off with 13 minutes to play.

He was one of only a few Spurs star names to start the match, with Dele Alli, Christian Eriksen and Son Heung-min all left on the bench. Victor Wanyama, back from injury, made his first start since August.

Lamela was Tottenham's greatest creative threat early on and he went closest to scoring, his volley stinging the hands of goalkeeper George Long.

Kane was a brooding presence in the visitors' box but after a couple of early sighters he blasted over from eight yards the sort of chance he might normally convert in his sleep.

The Wimbledon fans were enjoying every minute, taunting Kane and then celebrating like they had scored when their team won a corner soon after. 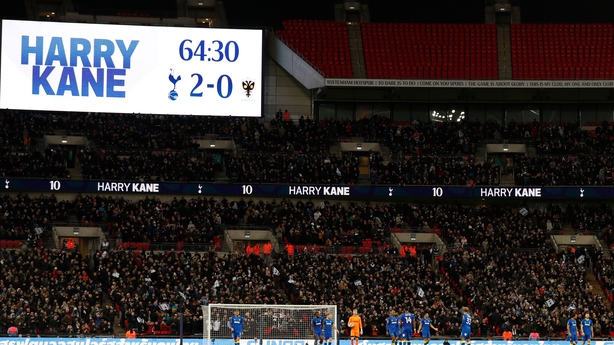 They almost had the real thing too when Michel Vorm made a mess of a high ball and then Abdou rattled Tottenham's crossbar with a bending long-range shot.

Disgruntled, the home support let out a collective groan when confronted with more dallying in defence and Moussa Sissoko responded with a bursting run through midfield.

Lamela was the beneficiary, slid through for a one-on-one, but his chipped finish was parried wide by Long.

Mousa Dembele cracked the post at the start of the second half but it was credit to Wimbledon's defence that Tottenham were now reduced to efforts from distance.

When Kane buried another in the red seats behind the goal, Pochettino responded by replacing Fernando Llorente with the in-form Son.

The South Korean may not have been involved but the impact was instant as Spurs, and Kane, scored twice in two minutes.

Kane's first owed much to more positive running from Sissoko, who overlapped Kieran Trippier and crossed for the striker to bundle in at the near post.

Wimbledon had barely got their breath back before Kane was celebrating again, this time more fortuitously as Kyle Walker-Peters' shot deflected perfectly for him to poke in at the back post.

Now Spurs loosened up and there was still time for Vertonghen to steal the show with a spectacular 30-yard strike, soaring into the top corner, for his first club goal since October 2013. Kane soon after trundled off to another standing ovation.