Llorente struck a controversial 12th-minute goal - his first in the Premier League for Spurs, after Harry Kane had been named on the bench following a seasonal heavy cold - before Alli clinched matters in the final minute for a 2-0 victory.

Bottom-placed Swansea could also take issue with referee Bobby Madley's decision to allow Davinson Sanchez to stay on the field after 55 minutes.

Sanchez, already been booked for an off-the-ball incident in the first half, scythed down Martin Olsson and seemed certain to be sent off.

Spurs might have felt Kane's demotion was a risk worth taking, with West Ham due at Wembley 48 hours later, but some excellent approach play lacked a cutting edge for the most part.

Kane was hoping to become the first player since Liverpool's Jack Balmer in November 1946 to score three successive hat-tricks in English league football.

But he did not arrive until the 67th minute, replacing the tiring Llorente, and by that time Spurs knew they were in a contest against a Swansea side managed at home for the first time by Carlos Carvalhal.

The Portuguese had instilled some belief in his side with a first-day win at Watford, and there were plenty of positives to be drawn from a second half in which the Spurs woodwork was struck. 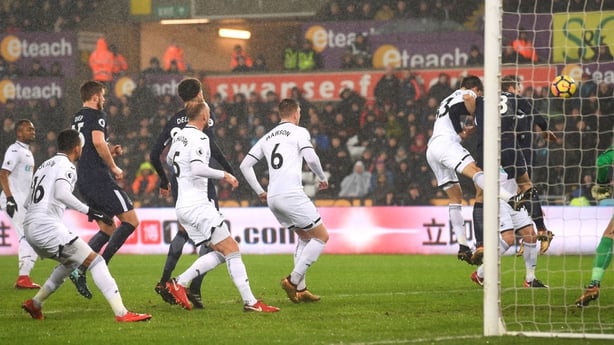 Tottenham old boy Tom Carroll felled Son Heung-min near the touchline and Eriksen's trademark delivery quality picked out the head of Llorente in the penalty box.

Llorente registered only his second Spurs goal, but refused to celebrate out of respect to his former club.

Tottenham's possession touched 80 per cent at times as Eriksen sprayed passes right, left and centre, but the good approach work lacked a killer pass or shot.

Lukasz Fabianski kicked away Kieran Trippier's cross-cum-shot but that was a rare moment of gainful employment for the Swansea goalkeeper.

Swansea had struggled to get up the pitch, but Trippier's careless back-pass which forced Hugo Lloris to scramble across his goal presented an opportunity for a rare attacking flurry.

Renato Sanches fired a free-kick over after Sanchez had pushed Nathan Dyer over before Olsson shot wide.

But the Eriksen-Llorente double act almost struck again close to half-time as the Spaniard stuck out a foot to another testing free-kick, with Fabianski grateful the ball was off-target this time. 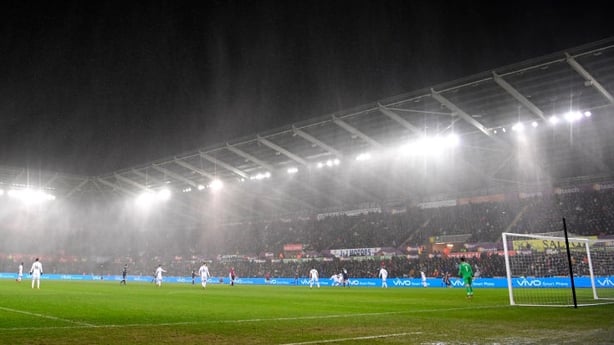 Eriksen's free-kick forced an excellent save from Fabianski at his near post but there was a far more even feel about the contest after Dyer drove wide and Sanchez escaped a red card.

Pochettino recognised the danger and sent Kane on at the three-quarter mark.

But there was as tail-wind behind Swansea and Lloris batted away Luciano Narsingh's effort before Ben Davies' desperate tackle denied Jordan Ayew profiting from his slaloming run.

Spurs survived again at the resulting corner as the ball hit Jan Vertonghen's back and struck a post before Trippier cleared, but Alli eased away nerves with time running out.

The England midfielder ran on to a brilliant ball by Kane and showed great instincts to lash home the rebound after his initial effort was saved by Fabianski.