Eden Hazard struck twice as Chelsea came from behind to beat Newcastle on Rafael Benitez's return to Stamford Bridge and maintain their impressive recent form.

Dwight Gayle came into the Newcastle side in place of the misfiring Joselu and he earned a shock lead for the visitors, who have now taken just one point from their last six games.

Hazard shone on his return to the starting line-up and levelled for Chelsea, with Alvaro Morata heading in his 10th goal of the season to complete the turnaround before the Belgium international dinked home a Panenka penalty in the second half.

Gayle was making just his third start of the campaign but - just as he did against Manchester United at Old Trafford - he put the Magpies ahead.

Unfortunately for Benitez, his side again failed to hold on to their advantage as Hazard, recalled after being named on the bench against Swansea in midweek, levelled.

Conte, watching from the touchline having been fined and reprimanded after being dismissed during Wednesday's victory over the Swans, had complained about fixture congestion before this game but his side looked fresh after responding to falling behind. 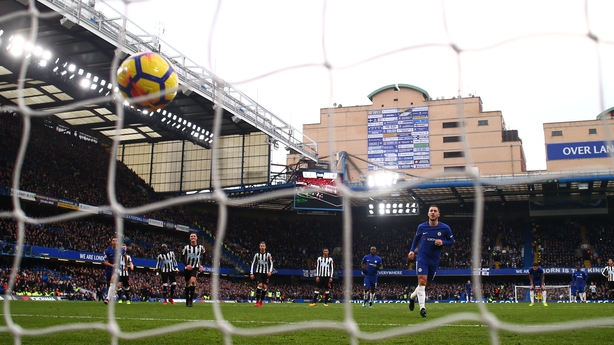 Hazard showed his quality in an early exchange as Chelsea dominated without being able to take advantage.

But it was Newcastle who took the lead as Thibaut Courtois did well to dive at the feet of the marauding Jacob Murphy with the loose ball falling to Gayle to sweep home into an empty net.

Cesc Fabregas, operating deeper than fellow midfielder Danny Drinkwater, lofted a superb ball into the path of Hazard but the Belgium forward saw his effort brilliantly saved by Karl Darlow.

Morata then had two penalty appeals turned down by referee Kevin Friend, the second of which was a clumsy challenge from Darlow.

The Blues were starting to turn the screw as Andreas Christensen headed against a post moments before Hazard drew the champions deservedly level with a smart finish.

They would lead just after the half-hour mark when Morata headed in a superb Victor Moses cross from close-range as Newcastle defender Chancel Mbemba was beaten far too easily by the Spain striker.

Hazard almost added a third 10 minutes into the second half as his strike took a big deflection to wrong-foot Darlow but fly wide of the post.

Newcastle were enjoying only fleeting spells of possession and creating very little, but Ayoze Perez arrowed a shot wide on the hour as the visitors sought a surprising equaliser.

Having had several shouts turned down, Chelsea were awarded a penalty with 16 minutes left as Matt Ritchie slid in to bring down Moses - Hazard coolly converting the resulting spot-kick.

Another smart stop from Darlow prevented Hazard completing his hat-trick before he was replaced to a standing ovation and with victory secured.