James Forrest feels big games will keep getting the best out of him after scoring in Celtic's League Cup final triumph.

Forrest curled home a brilliant finish four minutes into the second half of Celtic's 2-0 victory over Motherwell at Hampden to send Brendan Rodgers' men on their way to a fourth consecutive domestic trophy.

It was the third time in four years that the winger had scored in the League Cup final and Forrest continued a rich vein of form with an impressive all-round display.

The 26-year-old scored two crucial goals in the Champions League qualifiers - including the only goal against Rosenborg - and impressed recently against Bayern Munich. 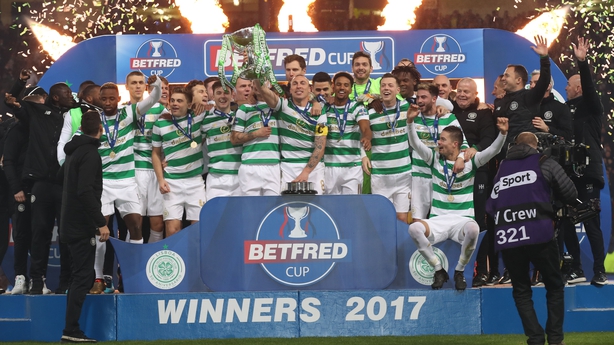 The Scotland player has also re-established himself as an international regular this year and admits he is feeling as good about his game as ever.

"Once the gaffer came in, last season was my most enjoyable and this season I feel I have kicked on," Forrest said. "I feel even better. So I just want to keep going and playing in big games.

"I have played a lot of big games this season and that's what you have got to do - you become a better player playing in big games. I'm just delighted to have scored the goal and helped the team get the trophy."

The victory took Celtic to 65 domestic games unbeaten but Forrest brushed off talk of another treble with two more games against Motherwell to follow quickly, starting with Wednesday's trip to Fir Park in the Premiership.

"There's that many games, every few days there's a big game so we just take it one at a time and take it from there," he said.

"We've had big games and have produced and keep on doing that. We have a big squad to cope with that as well and we have so many games until the break so we are going to need everyone."

Forrest's goal broke down a well-organised Motherwell side and sparked an entertaining contest for the following nine minutes until a red card and penalty killed off the game.