Head coach Antonio Conte had a sleepless night despite Chelsea securing their Champions League qualification in Baku on Wednesday.

The Italian prepared for Saturday's Premier League clash at Liverpool on the five-and-a-half-hour return flight to London after a 4-0 Group C win at Qarabag secured Chelsea's place in the last 16.

"We have to work during the flight, to prepare the game against Liverpool," said Conte, who repeated his complaints over the Premier League fixture schedule.

"I don't want to make excuses, but this is the reality. Also, when people hear the complaints of the coach, also someone has to help us. The press, the TV, to underline this strange situation."

Chelsea landed at Gatwick at around 4am.

The players were staying on Greenwich Mean Time while in Azerbaijan to avoid jet lag and Conte praised their character following the Blues' longest Champions League journey. 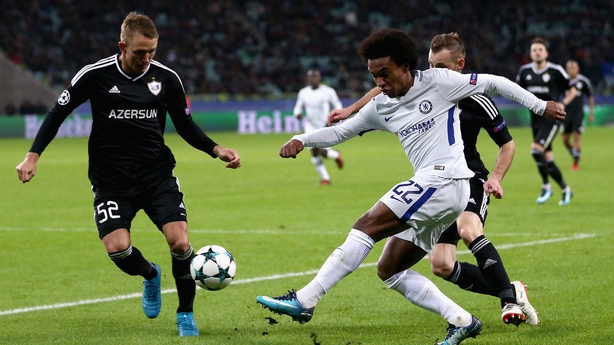 Conte was fuming after the 3-0 loss at Roma which left Chelsea's Champions League status in the balance, but was pleased with the response.

"From the start we faced a lot of problems this season. Our answer was positive, almost always positive. For sure, the second half against Roma was bad.

"These players show me every day great commitment, great will, desire to fight. We are a really good squad."
Securing their place in the knockout stages with one match remaining means Conte can rotate his options against Atletico Madrid next month.

There was some dispute over the first penalty, converted by Hazard after 21 minutes, as Qarabag captain Rashad Sadygov was sent off for a foul on Willian.

"I'm happy to score two goals. We deserved to win."