Martin O’Neill has brought David Meyler back into the starting XI for tonight’s World Cup decider against Denmark at the Aviva Stadium.

The manager has kept faith with the side who battled to a 0-0 draw in Copenhagen at the weekend, with Meyler’s inclusion the only change to the team that started in the Parken Stadium.

Callum O’Dowda drops to the bench to allow for the return of Meyler.

Meyler, as predicted, returned to the starting side having missed the Copenhagen clash due to suspension and will now anchor the midfield alongside Harry Arter and Jeff Hendrick.

James McClean will patrol the left flank, while Robbie Brady will start on the right.

Daryl Murphy again gets the nod to start up front.

The manager spoke about the need for more creativity following the stalemate in Copenhagen on Saturday night, while also suggesting that his side will need more than one goal to progress.

O’Neill’s men have struggled to score at home during this campaign, most notably in the big games – just one goal against Wales, Serbia and Austria combined, so the manager will be hoping that his side will right that particular wrong tonight.

However, O’Neill opted against adding more creative players as Wes Hoolahan is again left on the bench, while the pace of Shane Long will not be utilised until later in the game.

Darren Randolph will be hoping for a less-busy evening for this home encounter following his man of the match display in Denmark, where the Bray native made a string of top class saves.

The defence, as expected, sees Shane Duffy and Ciaran Clark resume their partnership in the middle of the back four with Cyrus Christie at right back and Stephen Ward on the left.

Denmark has made three changes from the side that started in Copenhagen with Andreas Christensen and Yussuf Poulsen coming in and Peter Ankersen and Andreas Cornelius both having to settle for a place on the bench.

That might just signal a change of approach from the Dane who are opting to leave their most obvious targetman in Cornelius on the bench. Poulsen, who replaces him, is a more technical player with a real turn of pace. 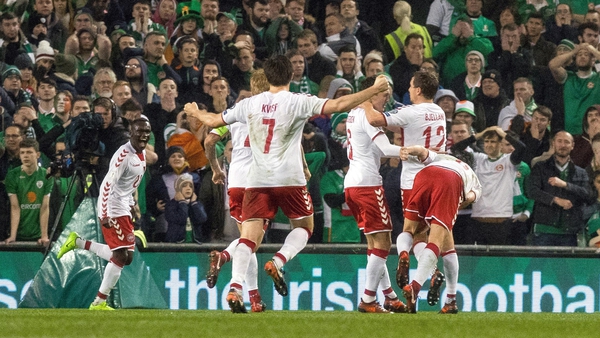 Ireland v Denmark - as it happened