The Republic of Ireland and Denmark could not be separated in Copenhagen as the World Cup play-off first leg ended scoreless at the Parken Stadium.

A string of Darren Randolph saves in the first half, and another in the final minute, kept Ireland in the contest as the home side dominated proceeding from the early exchanges.

Cyrus Christie enjoyed Ireland’s best effort on goal late in the first half and while Martin O’Neill’s men rallied somewhat in the second half, they will be more than happy with the result considering the home side were by far the better side throughout.

A real carnival atmosphere greeted both sides out onto the pitch with stadium displays and deafening fireworks adding to the occasion.

Ireland had named an apparent attacking formation with Callum O’Dowda included in the side, allowing Robbie Brady to take up the number 10 role behind Daryl Murphy. 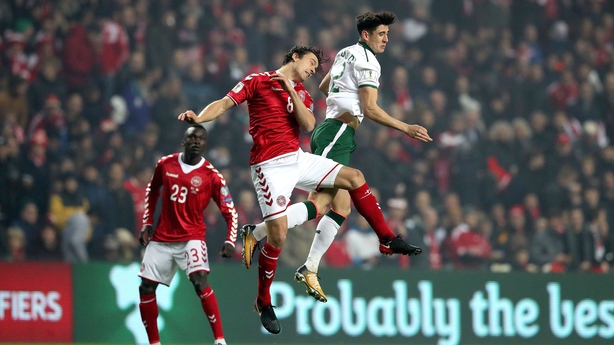 But it was the Danes who sparked into life in the sixth minute as the lively Thomas Delaney flew into a tackle in the middle of the park to send Eriksen charging through.

Cyrus Christie was alert to the danger and got across to put in a vital tackle to prevent the chance on goal.

Denmark were controlling affairs already, with their lively midfielders Thomas Delaney and William Kvist spraying the ball around the park unchallenged.

The cross-field ball was proving fruitful, especially down the left where Jens Larsen was lurking with intent, getting forward at every chance, possibly targeting O’Dowda as a weak link.

And then in the 12th minute, those tactics almost broke the deadlock as Larsen and then Andreas Cornelius were thwarted by Ireland keeper Randolph.

Another cross-field ball, this time from much deeper inside the Ireland half found Larsen unmarked at the back post and his perfectly hit volley was on target, but Randolph did well to parry the stinging shot.

Cornelius came charging onto the loose ball but he opted more for accuracy than power and again the Bray man saved to keep it scoreless.

Ireland’s only moments of respite came from the odd free-kick won around midfield but O’Neill’s men were wasteful with every opportunity to exert some pressure on the home goal.

Denmark should have opened the scoring in the 32nd minute.

And it would have been an early Christmas gift as their harmless long ball over the top was mis-cleared by Ciaran Clark straight into the path of the incoming Eriksen. 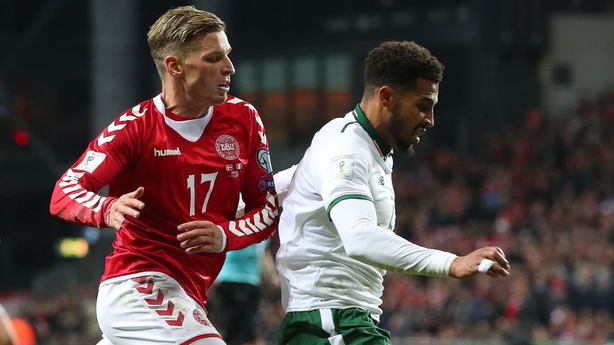 Time and space to shoot, the Spurs man hit a fine swerving effort, which Randolph could only push down into the path of Pione Sisto.

With the goal gaping, the Celta Vigo winger somehow managed to side-foot the ball wide of the far post. A shocking miss, it must be said.

Ireland’s best and only chance of the half thus far came from another mis-kick, this time from McClean’s boot as his attempted cross, sliced high into the air.

The West Brom man cleverly followed the ball and managed to direct it to the edge of the box, where O’Dowda was unmarked. But the Bristol City midfielder’s effort was blocked as the ball seemed to take an age to drop.

And then out of the blue, Ireland almost scored, as Murphy controlled the ball well and sent a hopeful ball down the right flank, perhaps asking a lot of the marauding Christie.

Coleman-esque, the Middlesbrough defender showed a great burst of pace to get in around the full back and found himself one on one with Kasper Schmeichel.

But the Danish shot-stopper clicked into family mode and made a great stop his father Peter would have been proud of. 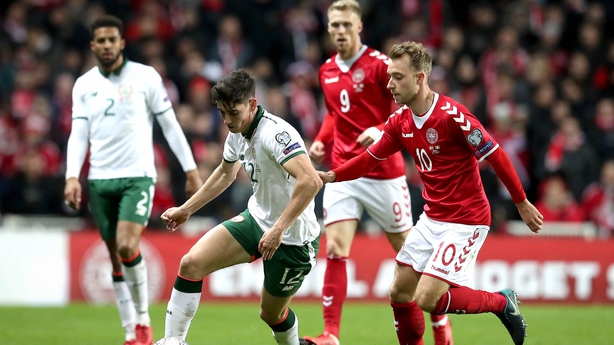 Hendrick followed up and moved the ball to the right to create space, but his attempted effort lacked conviction and the sides went in level at the break.

A sluggish start to second half from both sides, with Denmark perhaps taking a more measured approach in their attempt to break down this ever-stubborn Irish side.

Alternatively, it could be argued that Ireland were dragging the home side down to their level.

Ireland did make inroads into the Danish half in the 58th minute and again Christie was involved, running at the home side down the right flank.

But the composure was lacking in the Ireland attack, and despite O’Dowda’s best effforts, winning a headed at the back post, the danger was cleared.

Then in the 67th minute, a set-piece almost worked for the Irish side who appeared to be growing in confidence.

Brady whipped the ball into the danger zone. Duffy created a diversion and the ball dropped at the feet of the arriving Clark but he was unable to divert the ball on target.

Denmark had made their first change in the 64th minute with Yussuf Poulsen entering the fray.

And it took just five minutes for the RB Leipzig man to get involved as he found himself in space on the edge of the box.

Poulsen attempted to deceive the Irish keeper with a curling effort, but the ball just hopped the wrong side of the post.

Denmark now appeared to have got their second wind and also threw Nicklas Bendtner into the mix as they went in search of a winning goal to take to Dublin.

Randolph could have done better, Sisto HAD to do better (thank god he didn't) #denirl #RTEsoccerhttps://t.co/75x8kmyhZZ pic.twitter.com/MliUIGwM8e

Ireland had a great chance to win it in the 89th minute and take an away goal back for Tuesday’s return fixture as Duffy glanced a header goalwards. But again Schmeichel was in right place and easily gathered.

Then it was the Danes’ late rally that almost snatched it as Poulsen, who had proved a real threat since coming on, forced yet another great save from Randolph, who pushed the ball over the bar.

Ireland had to endure three minutes of injury time and Larsen’s low drive looiked to be heading for the target before Christie swung a leg to deflect the ball just past the post as Ireland survived.

So back to Dublin with the tie very much alive as O’Neill’s side edge closer to World Cup qualification.

But it will take a huge effort to beat this Danish side who will take real confidence from tonight’s encounter and travel to Dublin happy in the fact that they did not concede an away goal.