Alvaro Morata gave Manchester United a taste of what could have been by heading Antonio Conte's Chelsea to a much-needed victory as Jose Mourinho endured another frustrating Stamford Bridge return.

All eyes were on the touchline as the combustible managers faced off, with Manchester City's latest win leaving United eight points off the Premier League summit as pressure mounted on Conte just months after leading the Blues to the title.

The Italian twice got the better of Mourinho at Stamford Bridge last season and made it a hat-trick in a tense encounter on Sunday, with Morata's fine header giving Chelsea a deserved 1-0 win against second-placed United.

It looked like the Spain international would instead be wearing red until Mourinho completed a summer move for Romelu Lukaku, whose goalless streak stretched to a seventh match as the Chelsea striker brought his scoreless run to a timely halt.

Having seen an early Phil Jones own goal ruled out because of his foul, Morata capitalised on lacklustre United defending to superbly head home Cesar Azpilicueta's cross in the 55th minute.

It was no less than Chelsea deserved as they pressed the issue against an increasingly ramshackle United, although Marcus Rashford and Marouane Fellaini went close to snatching a fortuitous point as the clock wound down.

Chelsea rode their luck at the end of a match that looked to have got off to a dream start as Marcos Alonso's threatening cross was smashed into his own goal by Jones - only for Morata's foul to see it ruled out.

N'Golo Kante and Tiemoue Bakayoko had attempts of varying quality as the home side pushed for the lead, but it was far from one-way traffic thanks to a surprisingly open early approach from Mourinho's men.

Unmarked Rashford should have done better with a close-range header and a little more precision would have meant former Chelsea striker Lukaku beat Thibaut Courtois.

Instead the Chelsea goalkeeper was able to tip wide before opposite number David De Gea watched Cesc Fabregas direct into the side-netting after initially stopping Eden Hazard.

Like last season, Mourinho made sure the Belgium attacking midfielder had little room for manoeuvre - and a challenge on him from Antonio Valencia led to fury from Conte, who was spoken to by referee Anthony Taylor.

Jones and Herrera were booked in quick succession for fouls on Hazard as the theme continued after the restart as Chelsea began the second period as they ended the first. 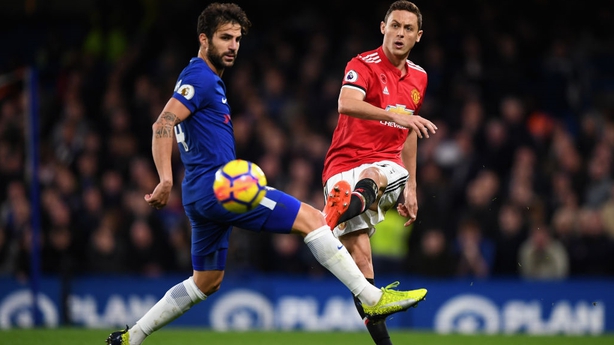 Morata had seen penalty claims ignored and Andreas Christensen missed the target as the opening period came to a close, while Hazard wasted a chance to stick it his former manager in the 53rd minute.

In the end it was the man who looked set to join United over the summer that broke the deadlock.

Rashford and Herrera attempted to draw parity before substitute Marouane Fellaini, looking rusty on his return from injury, sloppily gave away possession as Bakayoko went close.

De Gea saved from Hazard as the sides traded punches in the closing stages as United threw caution to the wind in search of a leveller.

Rashford hit a half volley just wide of Courtois' goal as the visitors pushed and the Chelsea goalkeeper had to be at his best to deny international team-mate Fellaini.

The Belgium midfielder saw penalty claims against Gary Cahill ignored as the ball came back into the box, with Rashford seeing a stoppage-time free-kick deflect just over.