Peter Crouch's second-half header earned Stoke a point at home to in-form Leicester and ensured a familiar scoreline at the bet365 Stadium.

Crouch nearly won it right at the death with another header but the result, coming on the back of a much-needed win at Watford last week, will have helped ease any pressure on Stoke boss Mark Hughes while Leicester's resurgence continued and they are now unbeaten in six games.

Claude Puel opted for another attacking approach in his second match as Leicester manager, looking to build on the victory over Everton.

His team started much the brighter and Demarai Gray, fresh from signing a new four-year contract this week, caught the eye.

Only a brilliant piece of defending from Kevin Wimmer prevented Jamie Vardy from turning in a low cross from Gray early on while Shinji Okazaki was just inches away from making contact with another Gray cross shortly afterwards.

Leicester's momentum was interrupted midway through the first half when referee Robert Madley had to be replaced by fourth official Jon Moss after sustaining what appeared to be a calf injury, bringing a chorus of "you're not fit to referee" from the away fans. 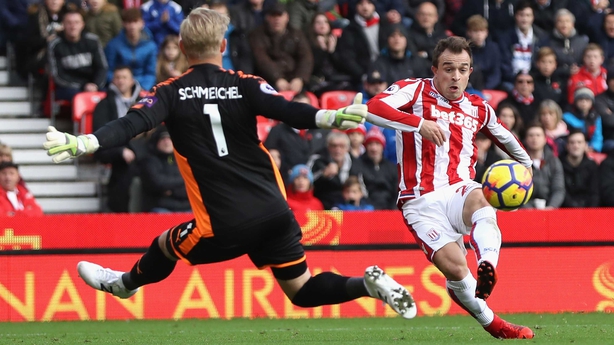 The break in play appeared to work in Stoke's favour as Eric Maxim Choupo-Moting raced on to a lovely pass from Ramadan Sobhi before turning inside Harry Maguire and bringing a block from Kasper Schmeichel.

However, Leicester took the lead after 33 minutes. A Mahrez corner to the far post was put back across goal by Maguire's aerial challenge and the ball dropped for Iborra whose powerful left-foot shot from six yards out was straight at Jack Butland but could only be pushed into the roof of the net by the goalkeeper.

A corner from the opposite side almost brought a carbon copy of the goal but this time Iborra's shot was blocked.

Butland produced a superb save to get Okazaki's close-range header over the crossbar but the resulting corner brought further panic for Stoke as Iborra powered a free header just over the crossbar.

Stoke looked on the ropes but were only behind for six minutes before Shaqiri got them level with a lovely bending finish from the right side of the box after Choupo-Moting's deft touch from Kurt Zouma's forward pass had put him through on goal. 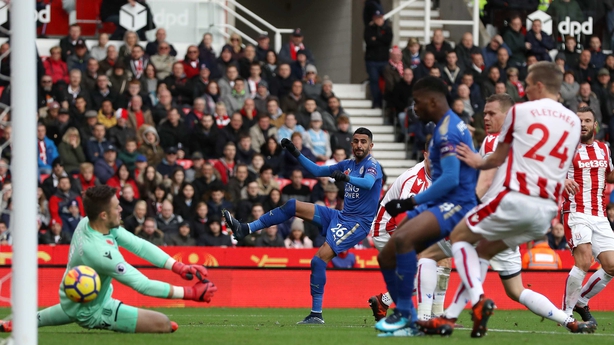 The pendulum continued to swing in the second half with chances at both ends. Shaqiri then worked Schmeichel with a low effort and Butland had to help a swerving long-range effort from Mahrez over the crossbar.

Schmeichel got down well to his right to repel a header from Ryan Shawcross and proved an important save as less than a minute later Mahrez restored the lead.

But still Stoke came forward and after 73 minutes they equalised again through Crouch's downward header from Shaqiri's corner.

Vardy dragged a shot wide as both team's looked for the victory and only a fine reaction save from Schmeichel deep into injury time denied Crouch the winning goal.