Conte declined to discuss Nemanja Matic's transfer from Chelsea to Old Trafford, or comment on his relationship with Jose Mourinho, ahead of Sunday's Premier League clash with Manchester United.

The Blues boss focused on his own team, who are seeking to respond from Tuesday night's 3-0 Champions League loss at Roma, which saw Conte questioning their "hunger".

"We are struggling a lot, because we are facing a lot of important problems," Conte said. "To solve these problems is not simple. In this moment you can see if you are a winner or a loser.

"It's important to show our character, to be strong, to face the problem in the right way."

Chelsea beat Manchester United 4-0 and 1-0, in the FA Cup, at Stamford Bridge last season and Mourinho cut a frustrated figure on both occasions.

The Portuguese, who won three Premier League titles in two spells with Chelsea, and Conte have exchanged verbal taunts, but the Italian declined to add to the animosity.

Conte said: "It's not important, the relationship between the coaches. We have to respect the job of the other coaches.

"I have a respect for the job. I stop and finish. He's an opponent and I'm an opponent for him. After the game it will be the same." 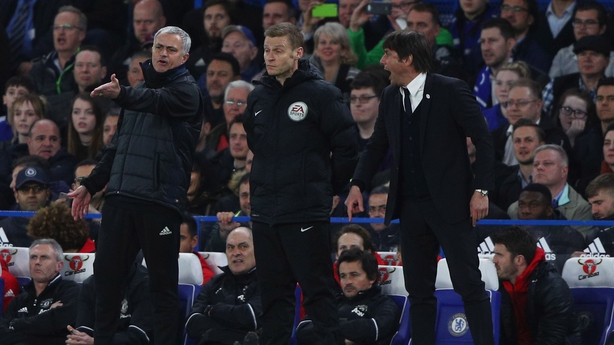 Some questioned Chelsea for allowing Matic to swap Chelsea for United in the summer, but Conte said he had addressed the topic before.

There has been regular speculation over Conte's own position, due to the Blues' battle for consistency this term.

This time 12 months ago Chelsea were embarking on a 13-game winning run in the Premier League.

They have lost three of their first 10 Premier League matches this term, to sit nine points behind leaders Manchester City entering this weekend's fixtures.

Asked how important Sunday's game is for the title race, Conte pointed to the form of Pep Guardiola's side.

N'Golo Kante is "progressing well" following his six-game absence with a hamstring injury and will be given every chance to prove his fitness and start.

Club captain Gary Cahill is to start on the left side of defence, having been substituted early on when starting on the right at Roma.

Conte declined to explain that tactical switch, saying: "Who must understand understands." Victor Moses (hamstring) is the only definite absentee.

United, and Mourinho, have been criticised for an at times negative tactical approach. Conte refused to discuss the prospect of Mourinho's men "parking the bus".

He added: "I don't care about this. I think only my team, only my players. I have to think to try to improve my team and not think of the others."