Managerless Everton crashed out of the Europa League with two Group E games left to play as they were beaten 3-0 at Lyon.

Former Chelsea forward Bertrand Traore, who had netted the winner in Lyon's 2-1 victory at Goodison Park a fortnight ago, opened the scoring midway through the second half, before substitute Houssem Aouar and former Manchester United man and Everton transfer target Memphis Depay wrapped things up.

The 80th minute dismissal of Morgan Schneiderlin, following a second yellow card, capped a miserable night for the Toffees.

The defeat, Everton's fifth in a row in all competitions, combined with Atalanta's 1-1 draw at Apollon Limassol, means the rock-bottom Toffees cannot reach the last 32.

Three of the losses have come since Ronald Koeman's sacking, and while caretaker boss David Unsworth has made it clear he would like the position full-time, the results so far are not strengthening his position.

Unsworth opted to rest the experienced trio of Wayne Rooney, Leighton Baines and Phil Jagielka for this contest, and his starting line-up - featuring six changes - had no recognised striker, with Gylfi Sigurdsson starting as a 'false nine'.

Unsworth had spoken about Everton "giving it everything to win" in a competition that was important to them - but the selection only emphasised the significance of Sunday's Premier League home clash with Watford.

After the hosts exerted some early pressure, with Mouctar Diakhaby just failing to convert Depay's free-kick at the back post, Everton settled and a tidy passing move led to the ball falling to Sigurdsson in the Lyon box in the 18th minute - but he could not produce a decent shot.

Lyon were soon back on the front foot and Jordan Pickford made a fine double save, parrying Traore's header and blocking a follow-up effort from Nabil Fekir, who then sent a shot over the bar.

Sigurdsson was beaten by his marker to a good cross from Jonjoe Kenny, and Mason Holgate was then fortunate not to score an own-goal as he diverted a Maxwel Cornet cross into Pickford's arms. 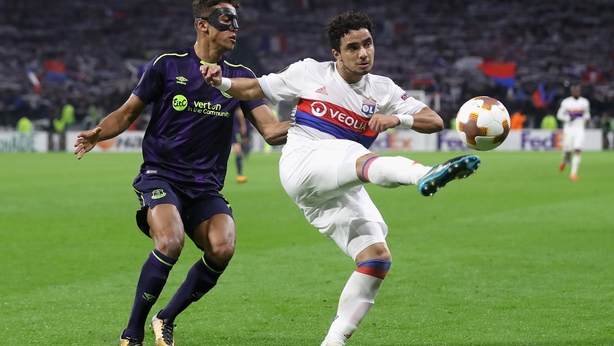 Pickford pushed away a Depay free-kick, before the game was halted for several minutes as Cuco Martina received treatment having fallen awkwardly after an aerial challenge with Cornet.

Replays indicated Martina may have been knocked out, and he was eventually carried off the field on a stretcher, with Muhamed Besic coming on to operate at right-back. The Toffees later announced the right-back was being kept in hospital overnight for observation.

In the seven minutes of added time that followed before the interval Pickford made another stop, keeping out a shot from Traore.

An excellent chance came Everton's way early in the second half when Ademola Lookman teed up Idrissa Gueye, who saw his strike saved by Anthony Lopes and probably should have done better.

After Lyon appeals for a penalty when Fekir went down under the attentions of Holgate were waved away by the referee, Lookman sent a cross to the near post where Sigurdsson tried to meet it but barely made contact.

It looked as if Everton might be building some momentum, but the game then got away from them entirely.

First Traore collected the ball, burst forward and slotted past Pickford in the 68th minute, then eight minutes later Pickford blocked a Mariano Diaz effort but was then beaten by a shot from Aouar, who was set up by Depay.

And after Schneiderlin was dismissed, Depay completed the scoring with a header two minutes from time.