A record-breaking goal from Sergio Aguero sent Manchester City into the Champions League knockout stages with a brilliant 4-2 win at Napoli.

Aguero struck in the 69th minute at the imposing San Paolo Stadium to enter the club record books as their leading goalscorer with 178.

It all but settled an absorbing contest in which City had responded to Lorenzo Insigne's early strike with goals from Nicolas Otamendi and John Stones, only to be pegged back again by a Jorginho penalty. Raheem Sterling put the gloss on City's win in the closing moments.

Both sides also hit the woodwork as the leaders of the Premier League and Serie A played out a high-quality game in keeping with their outstanding form.

Napoli, by contrast, were sharp and produced a number of good attacks in the opening quarter. It came as no surprise when Insigne fired them in front.

Hamsik was again involved before Insigne drove forward, played a one-two with Mertens and clipped a neat shot past Ederson.

City seemed unsure of themselves but a break in play for an injury to Faouzi Ghoulam allowed them to regroup.

A lot of Napoli's early success had come down the City right, where Pep Guardiola had fielded Danilo instead of Kyle Walker. David Silva was also surprisingly left out but his midfield replacement Ilkay Gundogan allowed City to gain a foothold. 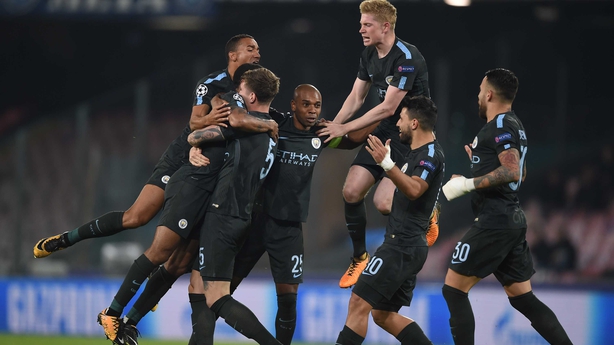 The tide turned as Aguero and Gundogan both had good efforts deflected off target and the equaliser came when Otamendi met a Gundogan cross with a firm header.

Otamendi might have had another soon after but miskicked in front of goal and Stones hit the bar with a header. Aguero headed another chance wide before Raheem Sterling, claiming a push by Elseid Hysaj, had a penalty appeal rejected.

City carried the momentum into the second half and went ahead when Stones thumped in a header off the bar from a Leroy Sane corner.

Napoli hit back as Insigne hit the woodwork from distance and Sane was adjudged to have fouled Raul Albiol in the box. Jorginho calmly stroked home the spot-kick.

Ederson made a great save from Jose Callejon but City broke from the resulting corner through Sane. He was unable to beat the last defender but Aguero picked up the loose ball and showed great composure to continue the charge and thump a shot into the bottom corner.

It secured Aguero's place in City history but more importantly put his side into a lead they did not relinquish.
With City through to the last 16 for a fifth successive year, Sterling added a fourth in injury time with a crisp low finish.