Manchester United are on the brink of reaching the Champions League knock-out phase after teenage Benfica goalkeeper Mile Svilar unwittingly put Jose Mourinho's men on course for another narrow win.

A fortnight ago the 18-year-old became the youngest goalkeeper to ever play in the competition - a historic night that ended in embarrassment after he misread a Marcus Rashford free-kick and carried it over the line.

This looked to be a far better night for Svilar after he saved Anthony Martial's early penalty, but misfortune struck the Benfica goalkeeper once again as Nemanja Matic's shot came back off the post and deflected in off him to set United on course for a 2-0 win wrapped up by Daley Blind.

It leaves United six points clear at the top of Group A with two matches remaining on a night that started with Mourinho taking aim at some of his club's supporters in the programme.

"I hope that you enjoy the game more than some of you did against Tottenham," he wrote after being irritated by some fans at the weekend, having felt Romelu Lukaku did not get the right support and seen his decision to bring on Martial met by some groans.

The Frenchman started this game and saw an early penalty saved by Svilar, but the teenager's hope of a better night than two weeks ago went down the drain when Matic's effort went in off him.

Eric Bailly was perhaps fortunate not to give away a first-half penalty and again breathed a sigh of relief when Raul Gimenez hit the post from his sloppy pass, although Blind's 78th-minute penalty gave United a welcome cushion.

Lukaku had looked set to take the spot-kick only for a confusing late change in taker, with Mourinho celebrating the second by making a chatting gesture in front of the cameras.

United were made to sweat at times by the side bottom of the group, with late replacement Andreas Samaris coming close before Pizzi got barged over by Bailly. 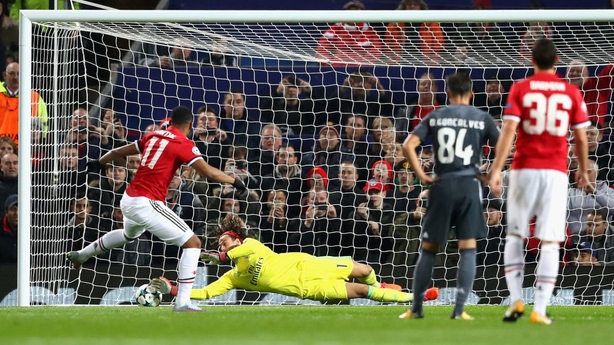 Mourinho's Reds were struggling to create but were awarded a penalty when Douglas handled in his attempts to deny fleet-footed Martial, who stepped up for the spot-kick only for teenager Svilar to save low to his right.

Chris Smalling headed wide from the resulting corner before Benfica came close at the other end, with Diogo Goncalves denied as David De Gea produced a save as spectacular as the curling effort.

United recovered well before the break and Juan Mata felt he was fouled in the box, with talented Svilar saving low at his near post after Lukaku showed quick feet and confidence.

The Belgium striker, Mata and Martial all threatened as the hosts pushed for an opener that arrived thanks to a large dollop of luck.

Caught out by Rashford's free-kick two weeks ago, Svilar was helpless as Matic's thumping drive came back off the post and deflected in off his back.

The Benfica goalkeeper managed to deny Lukaku a quick-fire second but could only look to the heavens at the half-time whistle.

The Portuguese champions returned strongly from the break and De Gea did well to deny Goncalves after a tame Gimenez strike as the visitors looked to restore parity.

Bailly almost gave them a gift-wrapped equaliser as Gimenez read his sloppy pass and sent a shot onto the post.

Mourinho turned to Rashford for the closing stages and the forward earned a penalty after Samaris' clumsy challenge.

Lukaku looked set to take the penalty, only for Blind to instead get the nod and fire home. Mourinho made a chatting gesture in the technical area afterwards.

Eduardo Salvio's header was saved by De Gea late on as the match came to a close, with United continuing their 100 per cent record.