Liverpool striker Daniel Sturridge wants manager Jurgen Klopp to give him more game time but accepts he has to deliver when the opportunity arises.

The England international scored the crucial first goal in the 3-0 victory over Huddersfield with a brilliantly-taken cushioned finish over goalkeeper Jonas Lossl.

It was his 100th club career goal and his 62nd in 130 games for Liverpool, a rate which would have been much better had it not been for three years of niggling injuries.

Sturridge believes he is now as fit as he has ever been but knows the challenge for him is to persuade Klopp he is worthy of a place in the team, having made only his fourth start of the campaign.

"It's (about) getting that rhythm, that flow. For myself, I feel like I'm best when I'm like that playing regularly," he told liverpoolfc.com.

"When I go onto the pitch it's important for me to show what I can do."

"But the manager picks the team and I'll never cause any issues or problems in the camp because he's the boss, I have a lot of respect for him and for his decisions.

"When I go onto the pitch it's important for me to show what I can do.

"It doesn't matter how many minutes you get, you've got to put your best foot forward and show what you can do for the team.

"I'm grateful for his faith in me (on Saturday) and hopefully I've repaid him with the goal."

The goal was only his fourth in 2017 and Sturridge said he had forgotten he had been waiting to bring up his career century since scoring against Arsenal at the end of August.

"I didn't even think about that, I completely forgot," he added.

"Hopefully there will be a lot more to come - there could've been a lot more but you can never look at the past, you look to the future and say hopefully I'll be able to score another 100 before my career is over." 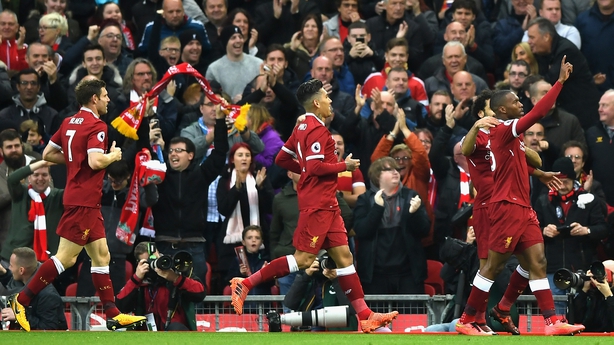 For all the criticism of Liverpool's defence following last week's 4-1 defeat at Tottenham the clean sheet against Huddersfield, managed by Klopp's best friend David Wagner, was the Reds' fourth at home - where they have conceded just one league goal.

Klopp had planned to give the same back four and goalkeeper the opportunity to redeem themselves only to lose Dejan Lovren, the man who came in for the most scrutiny, in the warm-up prompting a late promotion for Ragnar Klavan.

They were barely tested as the Terriers registered just one off-target shot as further goals from Roberto Firmino and Georginio Wijnaldum wrapped up a comfortable victory after Mohamed Salah's missed first-half penalty.

"I thought it made sense, it was the only reason why we did it," said Klopp of his decision to name the same back five.

"If something doesn't work you can change everything or you can stick to what you did before.

"I was convinced before the Tottenham game that these boys are the right ones and I will not change after one very bad performance, so I am not that confused."

Wagner was disappointed not to have been able to frustrate Liverpool for longer, as they had done the previous Saturday in ending Manchester United's unbeaten start to the season, but felt the week had produced plenty of positives.

"We learned something from the last two games when we played against the big guns," he said.

"We learned we are able to defend in a very good shape with very good effort and learned we can collect points if we make everything right from the first to the final whistle like last weekend."