Martin O'Neill was handed a welcome boost on the eve of his squad announcement for the World Cup play-off against Denmark, as James McCarthy made his first competitive start for Everton since February.

Interim Toffees boss David Unsworth named the midfielder in his 11 for the Carabao Cup fourth-round clash with Chelsea at Stamford Bridge, with hosts progressing to the quarters with a 2-1 win.

McCarthy has been hampered by a knee injury this term and although O'Neill named him in his squad for the games against Moldova and Wales, he didn't feature in either win.

Ireland travel to Copenhagen on Saturday fortnight before bringing the Danes back to Dublin three days later for the second leg.

Unsworth's first match as Everton's caretaker manager ended in a 2-1 defeat but it was a decent display by the Merseysiders.

The club favourite, who has spoken of his desire to permanently succeed the sacked Ronald Koeman, presided over an improved performance - but he will likely require more from his players if he is to succeed. 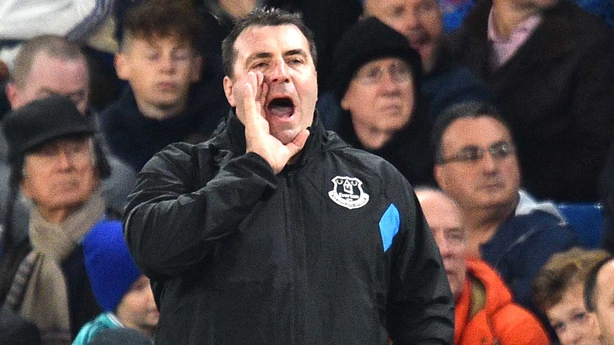 A vastly-changed team from that which on Sunday lost 5-2 at home to Arsenal, before Koeman's dismissal, played with greater confidence and energy and repeatedly threatened but lost following Antonio Rudiger's and Willian's goals.

Substitute Dominic Calvert-Lewin responded in injury time at Stamford Bridge - but at a point when the Toffees' elimination had already effectively been secured.

The Italian, who has repeatedly revealed concerns surrounded his squad's strength in depth, gave Danny Drinkwater his debut, Ethan Ampadu his full debut, and rare starts to Kenedy, Willy Caballero and Charly Musonda.

After beginning with greater composure and taking the lead, the hosts were stretched by Everton, suggesting Conte is right to be concerned.

Rudiger scored his first for the club since his summer arrival for an initial #29million in the 26th minute.

Willian played a left-wing corner short to Musonda, who then sent a curling cross into the penalty area, from where the unmarked Rudiger did well to leap and send a looping header over Jordan Pickford and inside the far left post.

It took until early in the second half for Everton to create a clear chance - but when they did the impressive Caballero would not be beaten. 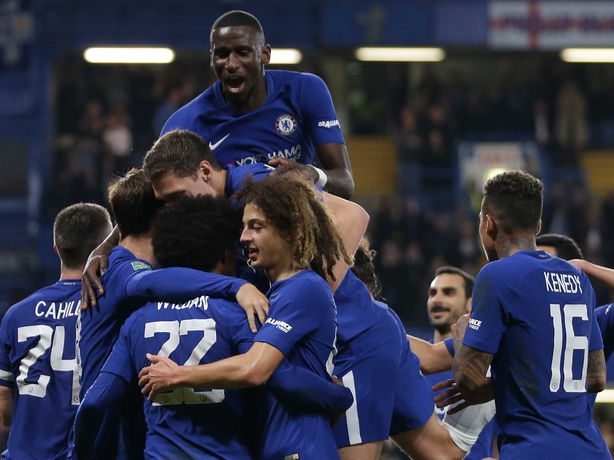 From Jonjoe Kenny's cross on the right wing, Mirallas knocked possession down to Wayne Rooney, who struck from directly in front of goal but watched Caballero's reaction save tip the ball wide.

The goalkeeper then rushed out to clear when Lennon ran through on goal almost immediately after, before producing a similarly impressive save from Phil Jagielka's header.

After Caballero had also saved from Mirallas' shot on the turn, Chelsea doubled their advantage in added time.

From another short corner, Willian exchanged passes with substitute Cesc Fabregas before running into the area and, at an angle, superbly curled a shot beyond Pickford and inside the far right post.

Oumar Niasse and Calvert-Lewin had by then already been introduced from the bench, and when Niasse's ambitious run took him into the penalty area and Chelsea struggled to clear, Calvert-Lewin routinely sent the loose ball beyond Caballero and into the back of the net for the visitors' consolation.