The substitute ran fully 70 yards from inside his own half and left three defenders on their backsides - two of whom had collided with each other - before sliding the ball home for a truly memorable strike.

Shane Long looked sharp in his 80 minutes on the field but his goal drought now extends to 26 games.

It was going to take a moment of supreme quality, or abject stupidity, to settle this otherwise drab affair and thankfully it was the former as Southampton's record signing secured their second home win of the season.

These two sides had previously only scored seven times each this season, so nobody travelled to the south coast expecting a goal glut.

But with the visitors exhibiting their customary lack of ambition on the road, Southampton soon took the initiative and were inches from opening the scoring after Long was fouled on the edge of the area.

Ryan Bertrand's free-kick flicked off the head of Jonny Evans in the wall and then came back off the top of a post.

Moments later Bertrand sped down the left wing before cutting the ball back to Dusan Tadic, who could only sidefoot straight into the arms of Ben Foster.

West Brom were not looking their usual defensively sound selves, especially after Evans departed with an injury Northern Ireland will be praying does not put his World Cup play-off hopes in jeopardy. 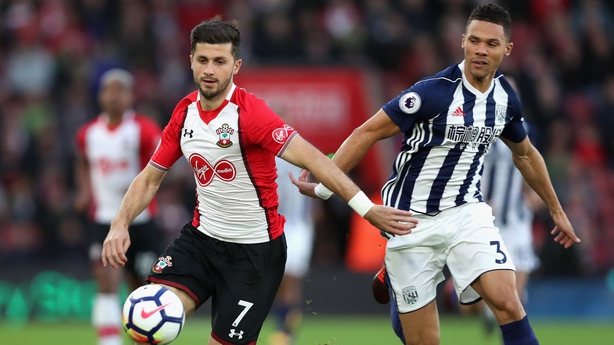 They had another escape when Virgil van Dijk appealed in vain for a penalty after a corner from Steven Davis appeared to hit the arm of Solomon Rondon.

The ball instead found its way to Oriel Romeu, who swivelled in front of goal but could only hook the chance wide.

Long had the opportunity to end his drought for club and country when Manolo Gabbiadini squared to him six yards out but the ball was a little behind him and the Republic of Ireland striker, making his 100th Saints appearance, stabbed his shot the wrong side of the post.

After the break West Brom almost landed a sucker punch when Grzegorz Krychowiak fed Jay Rodriguez, who burst through against his former club only to shank his effort wide.

But with five minutes remaining Boufal, who had only come on four minutes earlier, stole the show.

The Moroccan collected the ball deep inside his own half, skipped past Jake Livermore, slipped between Allan Nyom and Craig Dawson as the duo ran into each other, then curled the ball around Ahmed Hegazi and inside the far post to secure the three points in style.