The Everton fan who appeared to try and strike Lyon's Anthony Lopes while holding a child has been banned from attending future games, the club have announced.

That skirmish moved to the advertising hoardings at the Howard Kendall Gwladys Street End, at which point a man carrying a child pushed Lopes in the head before hitting out at him again.

In a statement issued on Friday, Everton said: "Club officials have reviewed the footage of an incident that occurred in the 64th minute of the game against Olympique Lyonnais where supporters towards the front of the lower Gwladys Street End became involved in a confrontation between players.

"We have identified one individual whom action will now be taken against. This will include a ban from attending future Everton fixtures and the club registering a formal complaint with Merseyside Police."

The force issued their own statement which confirmed they were also looking into the matter.

"That is disgusting" - Gary & Kenny weren't happy with an Everton fan, with a child in his hands, getting involved in the fracas. #UEL pic.twitter.com/Zs8VaEg3fd

European governing body UEFA is likely to take a dim view of the skirmish and both Everton and their defender Williams could face sanctions.

Williams, who was captain for the night, instigated the ugly scenes when he shoved Lopes off the pitch as the goalkeeper went up to make a catch on the byline.

Numerous Lyon players took umbrage with that and a fracas broke out involving men from either side, with the trouble even spilling into the crowd as the huddle reached the advertising hoardings.

Williams was booked for his role and appeared fortunate to escape with just a caution as replays showed he raised his hands to Lucas Tousart's face.

Speaking to BT Sport 2 after Everton's 2-1 loss, Williams said: "'It's what happens, it's football. It is what it is. 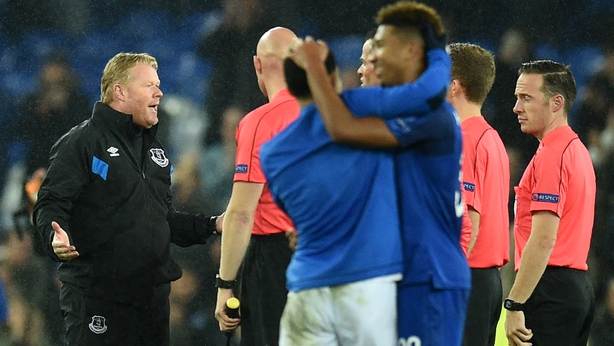 Under-fire Toffees manager Ronald Koeman had accused Dutch referee Bas Nijhuis of irking his players with his handling of the game before the incident.

"I think the irritation grows in the game for our players and in my opinion that was the problem by the referee," Koeman said.

"The referee was Dutch but he didn't do anything against the theatre of some of the Lyon players. (Nabil) Fekir in the first half dived 10 times. I understand with my players, that comes out of frustration."