Lionel Messi scored his 100th goal in European competition as Barcelona moved close to qualifying for the knockout stages of the Champions League by thumping Olympiakos 3-1 despite playing the entire second half with 10 men.

Gerard Pique was sent off two minutes before halftime for two bookings, one for tugging an opponent's shirt and the other for slapping the ball into the net, but Barca were barely threatened after the break by a hopeless Olympiakos side who are badly underperforming in their defence of the Greek top flight.

Barca took the lead in the 18th minute on a rain swept evening at a sparsely attended Nou Camp when visiting defender Dimitrios Nikolaou turned Gerard Deulofeu's cross into his own net.

Messi struck his landmark goal in Europe from a free kick in the 61st minute to double Barca's lead. It was his 97th goal in the Champions League, while his other three strikes in Europe came in the UEFA Super Cup.

The Argentine then carved his way through the hapless visiting defence moments later to tee up France left back Lucas Digne to score his first goal in the Champions League for Barca.

Greek defender Nikolaou put the ball in the net for the second time in the game by heading home from a corner at the other end to give Olympiakos a scantly deserved consolation goal in the 89th minute.

Juventus hit back to snatch a late 2-1 win at home to Sporting after gifting the Portuguese side an early lead with a bizarre own goal by Alex Sandro.

Four days after their two-year unbeaten home run was ended by Lazio, Juve were in more trouble when goalkeeper Gianluigi Buffon saved at foot of Gelson Martins but the ball hit Alex Sandro and went straight into the net.

Miralem Pjanic levelled with a superb free kick in the 29th minute and, just as Sporting seemed set to frustrate the hosts, Mario Mandzukic scored the winner with a superb diving header in the 84th minute. 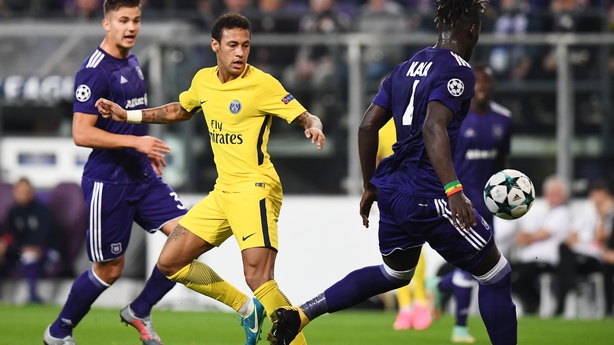 Paris St Germain's feared attacking trio all got on the scoresheet as the French side completed a comfortable 4-0 away victory over Anderlecht.

Kylian Mbappe, Edinson Cavani and Neymar all netted, while Angel di Maria added a fourth with a late strike, in a win that maintains the Ligue 1 sides 100 percent record in the group stage with three wins from three.

PSG should have won by a greater margin as they spurned a number of chances and will be confident of victory when the teams meet again in their next fixture in the group in Paris on October 31.

Goals either side of halftime earned Basel a 2-0 win at CSKA Moscow to keep the Swiss side in second place in Group A.

Midfielder Taulant Xhaka sped past CSKA's sluggish backline and unleashed a powerful low drive that beat veteran goalkeeper Igor Akinfeev in the right corner to put Basel up in the 29th minute.

Basel thought they had scored another early in the second half when Albian Ajeti's drive beat Akinfeev, but referee Bjorn Kuipers ruled offside. Dimitri Oberlin added another for Basel in the 90th minute.

Atletico Madrid's poor start to this season's Champions League continued as they were held to a frustrating goalless draw at Qarabag.

Despite claiming one point from their opening two games against AS Roma and Chelsea, Diego Simeone's Atletico side were expected to make light work of unfancied Qarabag.

Yet the Spanish side lacked a clinical edge, with Yannick Carrasco and Antoine Griezmann missing good chances in the first half before the Frenchman had an effort disallowed for offside after the break.