Manchester City moved two points clear at the top of the Premier League with another thumping victory, but Crystal Palace claimed the win of the day by upsetting Chelsea.

Palace had managed neither a point nor a goal in their opening seven matches but the return of Wilfried Zaha from injury inspired them to a 2-1 victory over the reigning champions.

Their first goal in the 11th minute was credited to a Chelsea player - Cesar Azpilicueta the unfortunate man - but Zaha struck the winner just before half-time after Tiemoue Bakayoko had equalised with his first Premier League goal.

They were 3-0 up in 27 minutes through goals from Gabriel Jesus, Raheem Sterling and David Silva.

Stoke gave themselves hope when Mame Biram Diouf netted in the 44th minute and the Etihad suddenly grew anxious when a Kyle Walker own goal closed the gap further two minutes after half-time.

But any worries were swiftly banished by three more City goals in seven minutes, with Jesus' second followed by strikes from Fernandinho and Leroy Sane. Bernando Silva finished off the scoring 11 minutes from time.

City's victory coupled with Manchester United's goalless draw against Liverpool at Anfield means Pep Guardiola's side have pulled clear of their derby rivals. 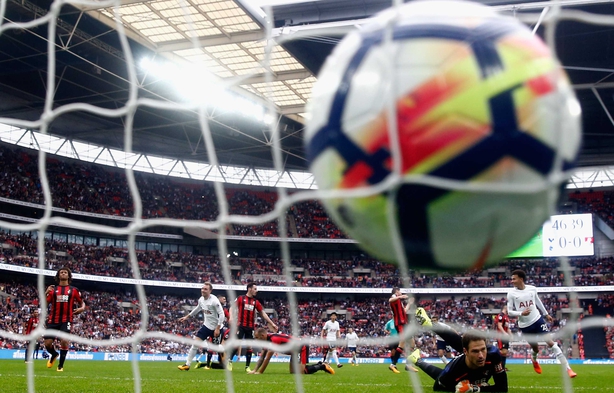 Tottenham sit third, three points behind United, after Christian Eriksen scored the only goal of a 1-0 victory over Bournemouth - their first Premier League victory at Wembley.

Michail Antonio's route one goal in the 19th minute came eight minutes before Andy Carroll was sent off after picking up two yellow cards in less than two minutes.

The Hammers held on until the 85th minute when Chris Wood made it 1-1.

Abraham capitalised on a mistake from Terriers keeper Jonas Lossl in the 42nd minute and then touched Jordan Ayew's shot over the line three minutes after the break.