The Aviva Stadium could be set for another blockbusting 24-hour double-header after the Republic of Ireland dramatically clinched a place in the World Cup play-offs.

Ireland, as an unseeded country, will face either Italy, Denmark, Switzerland or Croatia in the two-legged play-off, with the draw to be made next Tuesday [1pm Irish time, live on RTÉ Player].

If Ireland are drawn to play at home first, they'll face a potential clash with the rugby team's autumn international at the Aviva Stadium against South Africa on Saturday 11 November. 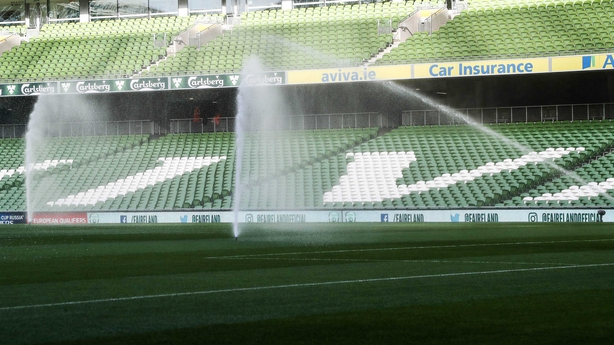 The series opener is a sellout, and kicks off at 5.30pm.

It's likely that Ireland would request a Thursday game if they are drawn at home first in the play-offs, to give stadium staff as much time as possible to complete the turnaround, but a 24-hour flip is not unprecedented.

Just last week Munster and Leinster squared off in the Pro14 at Lansdowne Road less than 20 hours after Martin O'Neill's men beat Moldova.

The logistics and challenges of preparing the pitch and ground for two huge occasions back-to-back are massive, but it could be an unavoidable headache after the balls are drawn at FIFA headquarters in Zurich in six days' time.