Gylfi Sigurdsson helped Iceland seal qualification for their first ever World Cup finals by scoring in an emotional 2-0 victory over Kosovo.

The Everton midfielder fired in a first-half opener before Johann Gudmundsson wrapped up victory in the second period to ensure Iceland finished a superb qualifying campaign top of Group I.

Iceland only missed out on the World Cup four years ago after losing to Croatia in the play-offs but this time the country with a population of 335,000 went one step further.

They became the smallest nation to reach a major tournament at Euro 2016, where they defeated England in the last 16 before going out to France.

Now ranked 22nd in the world, Heimir Hallgrimsson's side might fancy their chances of another surprise run in Russia, having lost only two of their 10 qualifying matches.

Croatia booked their place in the play-offs by winning 2-0 in Ukraine, cementing second place behind Iceland, while Finland's dead rubber with Turkey ended 2-2.

The Thunder-Capping islanders from the North Atlantic will be comfortably the smallest nation to ever qualify for a World Cup - population wise, if not physically.

With a population of just over 335,000 people, it is by more than a million people the smallest World Cup finalist ever. 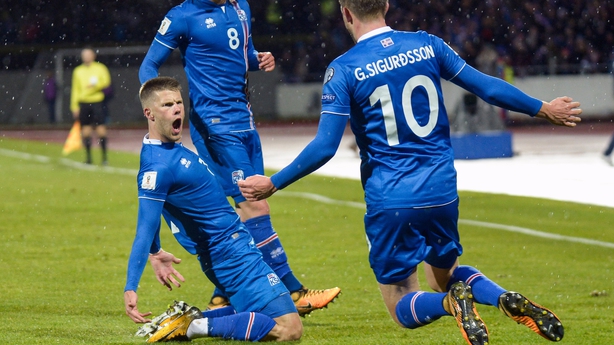 Trinidad & Tobago (1.37million)
The Soca Warriors made their sole finals appearance in 2006 in Germany, where they featured in the same group as Sven-Goran Eriksson's England. The team featured a number of players familiar to English audiences, including Shaka Hislop, Dwight Yorke and Stern John.

Northern Ireland (1.85m)
Michael O'Neill's men are on course to qualify for the first time since 1986. They also featured in Spain in 1982, having made their debut at the 1958 finals in Sweden.

Slovenia (2.08m)
They have featured twice at the finals - in 2002 and 2010. They failed to take a point from three group games in their maiden tournament, but came within a whisker of the last 16 in 2010, when a late defeat to England and a victory for the United States over Algeria eliminated them.

Jamaica (2.89m)
The Reggae Boyz were surprise qualifiers for France 98 and after being beaten by Croatia and Argentina in their first two matches, went home on a high with a 2-1 win over Japan.

Wales (3.1m)
The Principality made their only previous finals appearance in 1958, when they were beaten by eventual winners Brazil in the quarter-finals.

In 1990, when Jack Charlton led Ireland to Italia '90, the country had a population of 3.5m. At least half of whom seemingly took out a Credit Union loan to travel to the Boot.