He is quickly becoming Ireland’s main goal threat and Cardiff match-winner James McClean couldn’t hide his delight as he helped his team into the World Cup play-offs.

Martin O’Neill’s side travelled to Cardiff knowing only all three points would secure a place in November’s play-offs.

The Euro 2016 semi-finalists were odds-on favourites to claim runners-up spot in Group D, but the visitors displayed the usual grit that has become the norm for this resilient bunch of plkayers, and no little skill in delivering the 57th minute match winner through McClean.

Harry Arter’s step-over allowed the West Brom winger to finish with his weaker right foot and send the 3,500-strong travelling support into raptures and condemn the Welsh to their first home defeat in four years.

After his match winner in Vienna and a brace in the 3-1 away win in Moldova earlier in the campaign, McClean has become a key source of goals for Ireland, but was eager to acknowledge the role of his team-mates at Cardiff City Stadium.

James McClean, you absolute dancer. How about that step over from Harry Arter?!? #WALIRL #RTEsoccer pic.twitter.com/75hDzigE9L

"Jeff done amazing work. I think you have to give a lot of credit to Harry Arter...whether he meant that dummy or not, only he knows," he told RTÉ Sport.

"When the ball was coming to me, I was just thinking, ‘take your time, make sure you get it under control’ and thankfully it hit the back of the net.

"It was a great feeling."

The draw awaits next week for a play-off opponent, and it is a far cry from the dampened expectations that surrounded the single point garnered from the double header away to Georgia and at home to Serbia. The criticism that followed never impacted the squad’s self-belief insists the Derry native.

"After the Georgia and Serbia game, everyone wrote us off.

"Even coming here, tonight, not a lot of people gave us a chance, but again we showed the character in this team. Not just character, but quality as well.

"We fight to the very end, but it means nothing now if we don’t go and qualify.

"We’ll enjoy tonight and look forward to see who we get." 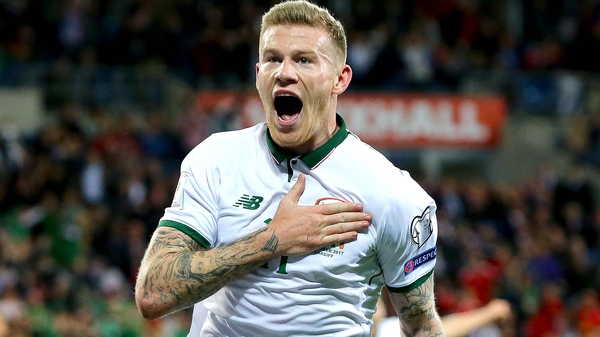