Robbie Brady and James McClean have been restored to the Republic of Ireland starting team to face Wales as manager Martin O’Neill makes three changes to his side for tonight's do-or-die World Cup qualifier.

Burnley wideman Brady and West Brom winger McClean missed Friday’s night’s 2-0 victory over Moldova at the Aviva Stadium through suspension, but have both been recalled to the starting team as Group D comes to a conclusion.

Harry Arter is also handed a start in the midfield engine room.

Hoolahan and Callum O’Dowda miss out tonight at Ninian Park, while Shane Long was earlier today ruled out through injury.

It’s as you were in defence, with Darren Randolph behind a defensive unit of Stephen Ward, Ciaran Clark, Shane Duffy and Cyrus Christie.

O’Neill might have been tempted to shift Brady into left-back, but he will be part of a five-man midfield.

Jeff Hendrick, Harry Arter and David Meyler will occupy the central midfield slots, with Glenn Whelan forced to settle for a place again on the bench.

Meyler retains the skipper's armband, while McClean and Brady are likely to offer width as Ireland go in search of the win.

Wales meanwhile make just one change with Hal Robson-Kanu replacing Sam Vokes up front. Otherwise it's the same team that claimed a crucial 1-0 victory away to Georgia on Friday. 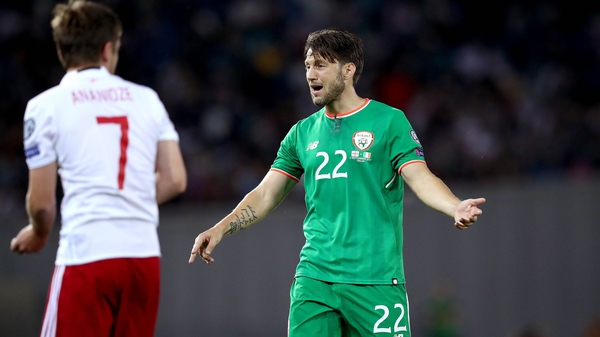 Georgia display to drive Arter if given starting role