Harps are second last but a win could lift them out of the bottom three, while the Lilywhites must take three points from Donegal to stop Cork City being crowned champions without kicking a ball.

Horgan is braced for a stern challenge.

"As I’ve said before there is never a good time to play Dundalk," he said.

"They’re coming here looking for the three points to keep their league title hopes alive. Even a draw won’t be good enough for them so you can see the way that Stephen Kenny will have them motivated for tomorrow.

"It’s very well documented at this stage that our record against them in two years is very poor. We haven’t taken a point or scored a goal against them in five league games." 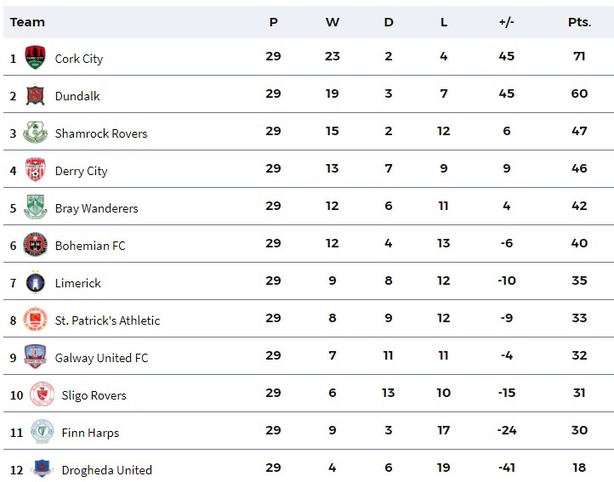 While Kilian Cantwell returns after suspension and skipper Ciaran Coll is back after illness the Harps boss has significant injuries concerns over Ethan Boyle and Sean Houston, while Paddy McCourt has been done very little training over the past couple of months because of a hip problem.

Yet again Packie Mailey won’t feature but Horgan remains hopeful that the central defender will still play a part at some stage before the season concludes.

For the visitors - who were beaten 4-2 by Shelbourne after extra-time in Wednesday night's Leinster Senior Cup final - Conor Clifford misses out through suspension after picking up five yellow cards while Steven Kinsella, John Mountney, Dane Massey and Chris Shields are all ruled out through injury.