Serbia can take nothing for granted against Austria as the Balkan team bid to qualify for the 2018 World Cup in Russia after an eight-year absence from major tournaments, midfielder Nemanja Matic said on Monday.

Serbia's only appearance as an independent nation in a showpiece event was a group-stage exit at the 2010 World Cup in South Africa.

They plundered a 1-0 win in Dublin against the Republic of Ireland last month and sit atop Group D with 18 points from eight games and in control of their own destiny.

A win against the Austrians and they'll be booking the plane tickets.

"Austria are a very good team with only pride to play for against us and that's the most awkward opposition in the home straight," Matic said.

"No one in Europe goes to Austria thinking they are favourites."

"I would prefer if they were still in the running for a World Cup berth because they'd be under as much pressure as we are at the moment."

Second-placed Wales (14 points) and third-placed Ireland (13) are slugging it out for the runners-up spot and a potential play-off berth while fourth-placed Austria (nine points) are virtually out of contention.

Matic stressed the expected mass turnout of Serbian fans - expatriates in Austria and those set to make the trip north - could make all the difference in Vienna.

"We know that thousands of them will throng the stadium and their support could swing the game our way," the Manchester United enforcer said. 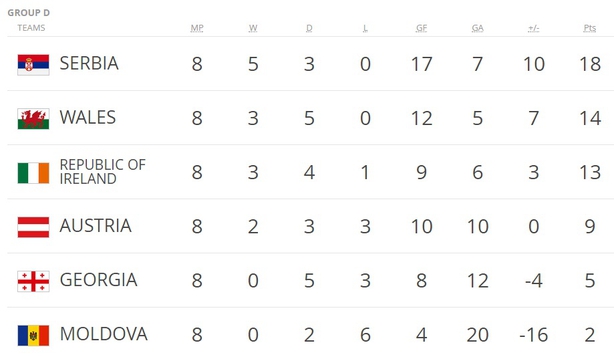 "No one in Europe goes to Austria thinking they are favourites and we are not in a position to look down on anyone, so the fan turnout could be vital.

"We must root out any euphoric emotions ahead of the game because that could well be our downfall."

Winger Dusan Tadic, one of Serbia's outstanding players in the campaign, said they were ready to face the prospect of qualifying going down to the wire.

"We want to get the job done now and are hoping that we won't need a second invitation, but if it happens we have to stay strong and finish it against Georgia," the Southampton player said.

"We are more mature than in previous qualifying campaigns and that's an essential ingredient that got us this far.

"Austria's results in this campaign have not gone in hand with their quality and we know that we are facing a tough game."