The imposing former England forward poked home from close range in the 85th minute, 15 minutes after coming on, to seal only the second victory of the season for the Potters.

Maya Yoshida had appeared to rescue a point for Southampton after he fired home a 75th-minute equaliser to cancel out Mame Biram Diouf's headed opener in the 40th minute.

Diafra Sakho came in from the cold to hit a last-minute winner and dig West Ham manager Slaven Bilic out of a hole as his side sneaked to a 1-0 win against Swansea.

The London Stadium was almost in open revolt following an insipid 89 minutes from the home side against Swansea.

But Sakho, who if he had got his way on transfer deadline day would now be in France playing for Rennes, climbed off the bench to secure a 1-0 win and bail out his boss. 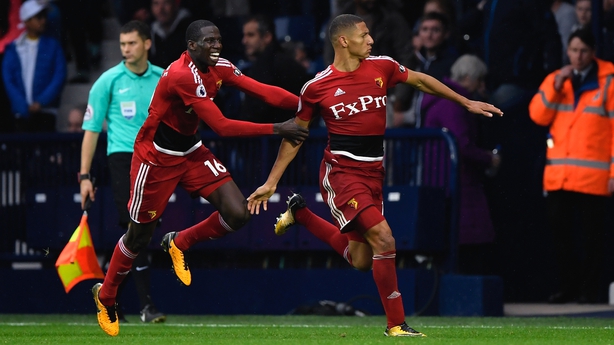 Watford fought back from two goals down against  West Brom at The Hawthorns with a header from Brazilian Richarlison earning the Hornets a 2-2 draw deep into stoppage time.

The Baggies had earlier struck twice in the space of three first-half minutes.

Watford, though, reduced the deficit in the 37th minute through Abdoulaye Doucoure and snatched a dramatic equaliser when Richarlison nodded in from a free-kick in the fifth minute of added time.

Bournemouth were unable to take advantage of their greater possession and chances in a 0-0 draw with Leicester City that kept them in the Premier League's bottom three.

Jermain Defoe hit the bar for the home side in the second minute but that was as near as they came in a typically low-scoring meeting between the clubs. Their five Premier League games have produced only five goals.

Leicester improved a little in the second half but created few chances, Japanese striker Shinji Okazaki missing one of the best.

Leicester striker Jamie Vardy, who England agreed could miss next week's internationals to rest a troublesome hip, played from the start but had a quiet game.