Celtic defender Mikael Lustig has hailed keeper Craig Gordon for the save that kept the Hoops on course for Old Firm victory.

Brendan Rodgers' Premiership champions were made to work by Rangers during a compelling first 45 minutes at Ibrox on Saturday.

But goals from Tom Rogic and Leigh Griffiths after the break wrapped up a 2-0 win that took the Parkhead side's incredible domestic unbeaten run past the 500-day mark.

However, Swedish defender Lustig admits the result could have been so different had it not been for Gordon's intervention.

Former Hoops striker Chris Sutton has been a vocal critic of the Scotland number one's displays for both club and country in recent months.

But he proved his quality with an instinctive save to stop Alfredo Morelos levelling for Gers with a point-blank ranger header just moments after Rogic's opener.

"Maybe Rangers had a short two or three minute spell just after we scored but after that we were really comfortable," right-back Lustig told CelticTV.

"Craig made a top-drawer save to keep it at 1-0. You need a really good keeper in these games and we have got that in Craig.

"His save was vital. Maybe had they gone to 1-1 it could have been a different game.

"But from that moment one we proved we're the best team again." 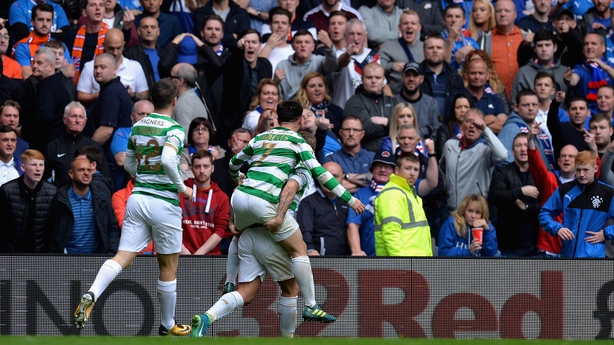 Victory over the Light Blues - their sixth from seven clashes since Rodgers was appointed last year - was the perfect warm-up performance for Celtic as they prepare to Wednesday's Champions League clash with Anderlecht.

The Hoops got their group-stage campaign off to a nightmare start two weeks ago as they were hammered 5-0 by French giants Paris St Germain.

But Lustig hopes they can follow up their derby triumph with another win which will put them in the box seat for a Europa League slot.

He said: "We know it's a massive game on Wednesday, especially as we were not satisfied with the game against PSG.

"We want to be in Europe [after New Year] so hopefully we can grab some points and play some good football."