Cork City's title party was put on hold yet again as Dundalk cruised to another derby win over Drogheda United at Oriel Park.

Goals either side of the break from Steven Kinsella, making his full league debut for the Lillywhites, and David McMillan paved the way for Stephen Kenny's side to record their fourth victory of the campaign against their neighbours before Michael Duffy added a third in stoppage time.

The result, coupled with Limerick's win against Cork at the Market's Field, leaves the champions 11 points behind the Leesiders ahead of their meeting at Turner's Cross on Monday evening.

Pete Mahon's strugglers made an impressive start here and almost pulled ahead with just three minutes on the clock.

Adam Wixted sliced the Dundalk back-four open with a through ball for Shane Elworthy but Brian Gartland raced back to head his goalbound effort off the line.

Dundalk went within a lick of paint of opening the scoring in the 24th minute when Dylan Connolly let fly with a half-volley that crashed back off the post.

The visitors showed no signs of retreat and they threatened again just shy of the half-hour when Sean Brennan's crossfield pass caught Gary Rogers in two minds.

The 'keeper opted to stay, allowing Thomas Byrne the chance to lift the ball towards goal, but the Lilywhites netminder recovered to make a stunning save.

It looked like the half would end scoreless but Dundalk drew first blood four minutes before the break.

Gartland's cross from the right was met by Stephen O'Donnell who saw his header brilliantly saved by McGuinness but Lady Luck turned her back on the keeper as Kinsella was on hand to turn the loose ball home. 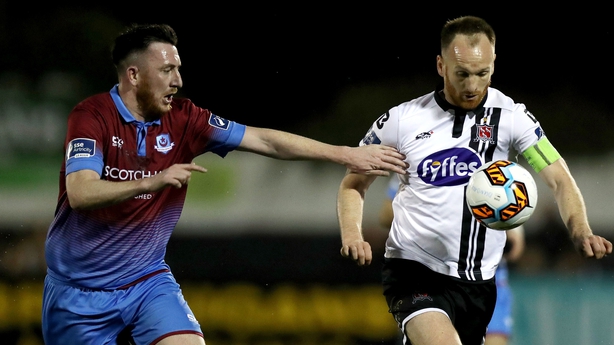 Dundalk added a second in the 51st minute when McMillan steered a Sean Gannon ball into the far corner, taking his tally to 16 league goals for the season.

And the natives had further chances to add more to their tally with McGuiness making a smart save from substitute Michael Duffy and McMillan rattled the crossbar with a piledriver.

Another miserable night for Drogheda was compounded when Thomas Byrne was sent-off for a second bookable offense with eight minutes to play before Duffy rounded off the scoring with a classy finish in stoppage time.