Victory in Limerick coupled with a Dundalk slip-up against Drogheda would clinch it, but it's more likely that the Leesiders will head into Monday night's collision with the Lilywhites aiming to wrap it up on home soil.

They're 14 points clear with six games to and have long looked like champions elect. John Caulfield will be keen to put it to bed as soon as possible though, and won't take anything for granted against a Limerick side desperate for points to pull away from the congested battle against relegation.

They're currently just two points clear of the bottom three. 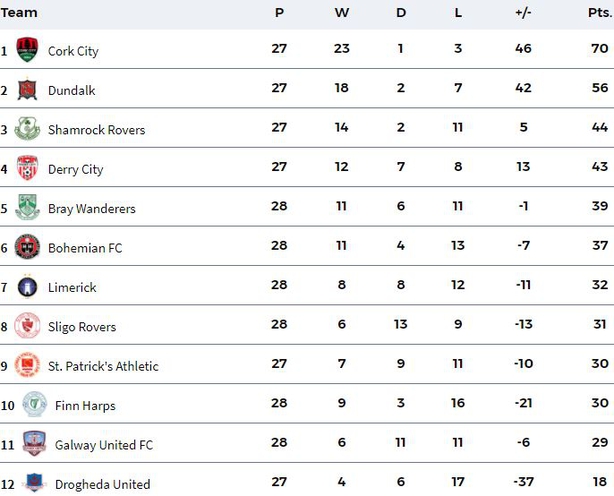 Cork City: Johnny Dunleavy and Alec Byrne are long-term absentees. Alan Bennett, Garry Buckley and Steven Beattie have all suffered knocks and will be assessed ahead of kick-off.

John Caulfield (Cork City): "It’s a Munster derby and we are at the stage in the season where you have to be at 100% to get results. At this stage in the season, every team has something to play for. As I always say, there are no easy games in this league and going to Limerick will be a tough game for us." 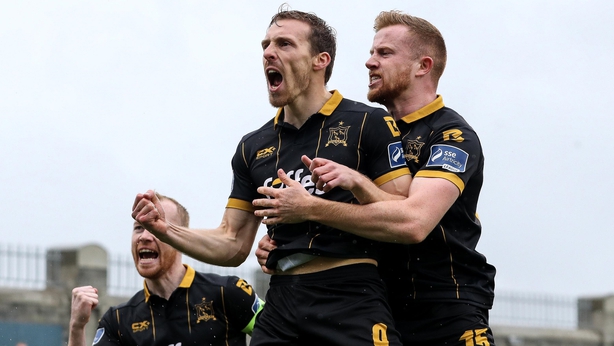 Dundalk will keep pushing Cork until the bitter end and Stepehen Kenny's men come into the final Louth derby of the campaign in fine form.

With the EA Sports Cup in the cabinet and an FAI Cup semi-final against Shamrock Rivers on the horizon, the Lilywhites still have lots to play for.

The Drogs, meanwhile, look doomed. They're 13 points from safety and are heading back to the First Division having gained promotion last year.

Dundalk hammered their neighbours in the FAI Cup quarters a fortnight ago and have won the other two fixtures between the sides this season.

Dundalk: Dane Massey returns after a knee injury but John Mountney is out due to an osteos pubis problem and Tommy Stewart is a doubt with a hip flexor injury.

Drogheda: Suspended pair Jake Hyland and Chris Mulhall are out, while Sean Russell and Conor Kane are injured. There are doubts over Colm Deasy, Jack Bayly and Stephen Dunne though Ryan Masterson returned to training this week.

Michael Duffy (Dundalk): "We just want to keep building on or form, we’ve been playing well for the past two months and we want to take that into the Drogheda and Cork games. Then we have the semi-final of the FAI Cup against Shamrock Rovers which is going to be huge.

"We'll obviously being going into that confident after beating them 3-0 and hopefully we’ll get to another final and give the fans a day out in the AVIVA."

Pete Mahon (Drogheda): "It doesn't get any easier for us. They've given us some big defeats over the last couple of years but I don't think we've anything to lose at this stage. We only have six games left this season and I certainly don't want this winless run to carry over until next year." 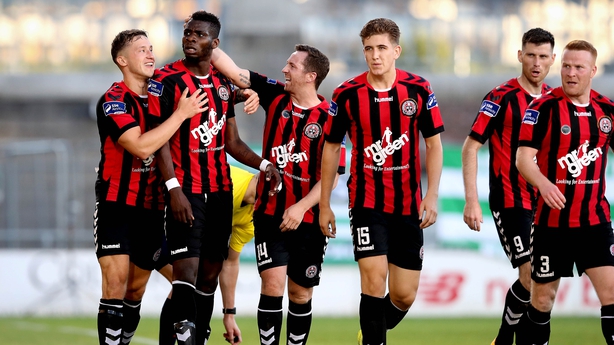 Bohs can pile the pressure on the Saints in the Dublin derby at Dalymount with victory tonight.

Liam Buckley's men are only clear of the bottom three on goal difference - though they do have a game in hand - and if results go against them they could end the night second bottom.

The hosts aren't safe yet either but they can take another massive step towards safety with three points here.

Both sides have one win each from the previous two league meetings this season. Pat's claimed a 4-0 win in Phibsboro back in March while Bohemians picked up a 3-1 win in Inchicore in June.

Bohs: Oscar Brennan is suspended and Dylan Hayes (hip) will miss this one, as will Eoin Wearen (cruciate).

St Pat's: the Saints are without skipper Ian Bermingham through suspension, while defender Darren Dennehy and goalkeeper Barry Murphy miss out through injury.

Keith Long (Bohs): "We're not out of the woods yet, despite what some are saying. We still have points to pick up and we want to finish the season as strongly as possible. The complexion of the league table will change again tomorrow. It's up to us to look after our own result and our performance to make sure we don't get dragged down."

Liam Buckley (St Pat's): "We’ve had a bit of a break without a game so this first game back against Bohemians is one the players are looking forward to.  With it being a Dublin derby, the players need no motivation and from past fixtures we know that it can go either way against Bohs so we need to really be at it from the start." 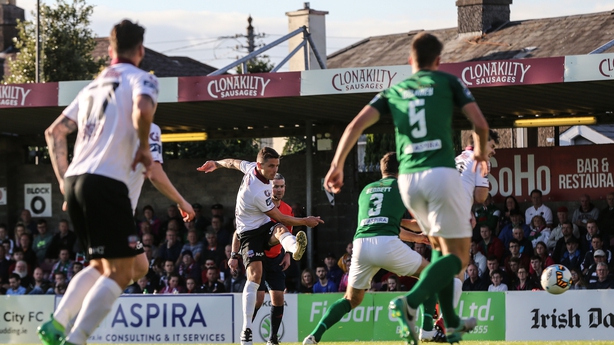 It's crunch time for both of these sides as the battle to beat the drop intensifies.

The Bit O'Red secured a 2-1 win away to Finn Harps last weekend in Finn Park to move a point clear of the relegation zone, while Galway turned over Derry City to give themselves a huge shot in the arm.

They're two points behind Sligo coming into this showdown and both teams will be desperate to maintain their momentum as the season heads for its climax.

Galway United: Niall Maher limped off with a hamstring injury in the win against Derry City last week and will not feature.

Sligo Rovers: Raffaele Cretaro, John Russell and Michael Leahy all return from suspension, though Craig Roddan serves the final game of his ban. Tobi Adebayo-Rowling, Greg Moorhouse and Michael Schlingermann are doubtful with injury, with hopes highest over Adebayo-Rowling that he can feature. A final decision will be made on Friday.

Shane Keegan (Galway United): "We have to have a massive crowd at the game, it's vitally important. It's a game we need to get bums on seats for. It's going to be a pivotal night in both team's season."

Gerard Lyttle (Sligo Rovers): "Galway are a very good side and I’m sure they have the same confidence from their win against Derry. We focus on our performance. Last week we went to a difficult place in tough conditions and showed we are progressing. I feel there is a mentality change. We want the fans to get behind us again on another big night and we want to repay them." 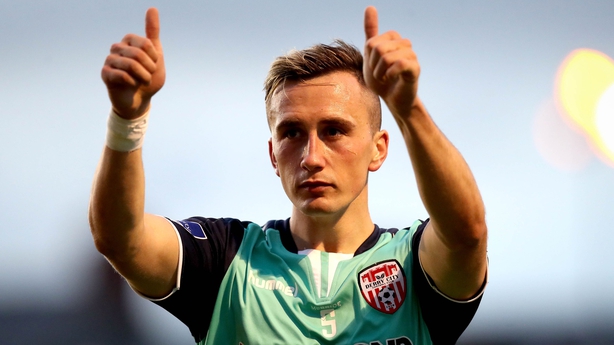 The Candystripes are still pushing for third to guarantee European qualification.

They're a point behind Shamrock Rovers and after last week's disappointing loss to struggling Galway, Kenny Shiels will expect an instant backlash from his players.

Bray have endured a nightmare campaign that's lurched from one disaster to the next off the field but they are are at least bedded in the safety of mid-table obscurity.

Bray Wanderers: Bray have concerns about the fitness of Mark Salmon who returns from suspension but is also carrying a hamstring strain while goalkeeper Peter Cherrie is struggling with a back injury.

Kenny Shiels (Derry City): "Fourth is not a mission we are on, we are trying to secure third," he told the Derry Journal. "It’s out of our hands now for the first time this season but I can see a big improvement this week at training."

Harry Kenny (Bray Wanderers):  "We’re looking forward to the challenge against Derry City on Friday night, we have beaten Derry in the two previous games this season with Tim Clancy getting the winner in both games.

"There was certainly nothing between the teams earlier in the season and I expect no different this week." 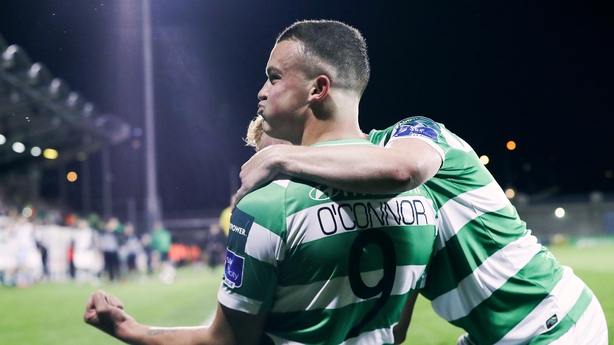 Finn Harps make the trip to the Tallaght in desperate need of a result.

Their loss to Sligo left them third from bottom, and Ollie Horgan’s outfit will hope to catch their hosts cold.

The Hoops will be reeling from their EA Sports Cup final defeat to Dundalk but they'll want to hold on to that third spot and, with a rematch against the Lilywhites in the FAI Cup semi-final to look forward to, Stephen Bradley will want a instant response.

Finn Harps: Kilian Cantwell is suspended and Packie Mailey is still out with a hamstring injury. Paddy McCourt has been playing through the pain barrier for a number of weeks and will be assessed before kick-off, while Gareth Harkin (groin) Sean Houston and Ethan Boyle are also doubts.

Stephen Bradley (Shamrock Rovers): "I expect a tight game. Harps are a team that don't get beaten by many goals, more often than not, they come with a good game plan. They're hard to beat and dangerous from set pieces and on the counter attack. If we play the way we have been in the last three months or so and the way we played last week for 60 minutes I believe we'll be okay."

Ollie Horgan (Finn Harps): "We have to go to Tallaght and try and get something from the game which is going to be very difficult with the quality that they have in their squad. We need a really massive effort from the team tomorrow night because every point is going to be priceless with just five games left."