There weren't many great players Jimmy Magee didn't see in his 82 years.

Before his passing he chose his all-time best Republic of Ireland XI, a team laced with steel, class and serious pedigree.

"I think we'd win the World Cup with this side..." 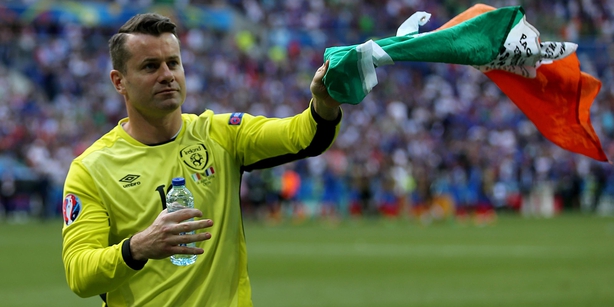 "At his best, one of the best." In goal for Jimmy is the towering Donegal stopper. His countyman Packie Bonner will forever be remembered for that iconic penalty save against Romania at Italia 90, but it's Given who gets the nod in this all-time XI. A terrific shot-stopper and commanding, reliable presence, he gave his country 20 years of service before hanging up his gloves for the second and final time last year. He first retired from the international game in 2012 but was coaxed back into the fold by Martin O'Neill to be a part the Euro 2016 panel. 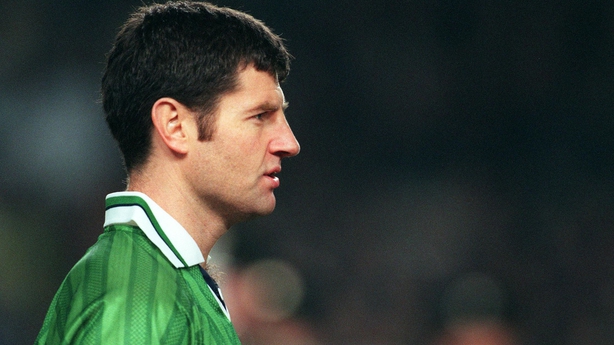 "He played a lot of his football at left-back, but ask him yourself, and I have, and he'd prefer right-back. If it's good enough for Denis, it's good enough for Jimmy." As consistent a full-back the Premier League has ever seen, Irwin was a mainstay of Alex Ferguson's great Manchester United teams throughout the 90s and a key cog in the powerful Ireland sides helmed by Jack Charlton. Unflappable and tenacious, the Corkman was also a dead-ball wizard. When trying to select his own all-time best 11, Ferguson once said: "Honestly, I would say Denis Irwin would be the one certainty to get in the team." 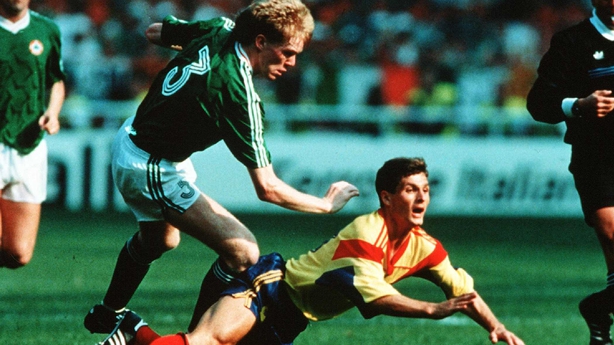 Another steady Eddie who occasionally produced the spectacular. Staunton scored eight times for his country - once directly from a corner against Northern Ireland in 1993 - and his wicked left foot was a tremendous weapon. Moved to centre-back later in his career but he's stationed on the left of Jimmy's team, where he offers poise and balance.

At the heart of Jimmy's defence, a Sunderland legend, and Martin O'Neill's boyhood hero. Hurley spent 12 years in the north east of England and after playing for the Black Cats on a Saturday afternoon, would sometimes get the train down to Liverpool and then sail to Dublin and play a home game for his country that same weekend. In an era where it was highly unusual for defenders to roam forward for corner-kicks, Hurley became something of a trend-setter, scoring 23 times in his long club career and twice for Ireland in his 40 caps in the 50s and 60s. 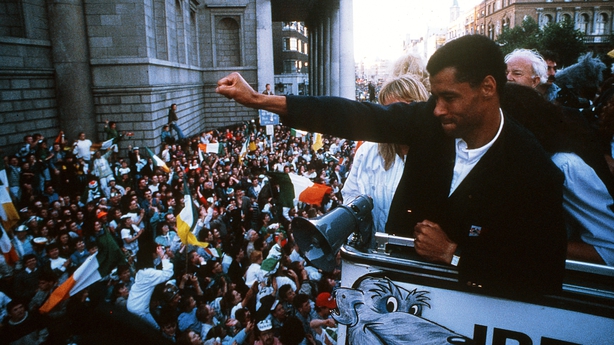 Who else but Paul McGrath? Ian Rush - who had a terrible scoring record against Manchester United in his playing days - described the Dubliner as the best player he'd ever played against on Saturday Night with Miriam O'Callaghan back in July, adding: "The first time I did score against Manchester United, I thought it was great because it stopped them winning the league (in 1992). I remember Ronnie Whelan was running over to me and I went 'where's that Paul McGrath now?' He went, 'He's playing for Aston Villa you idiot.' 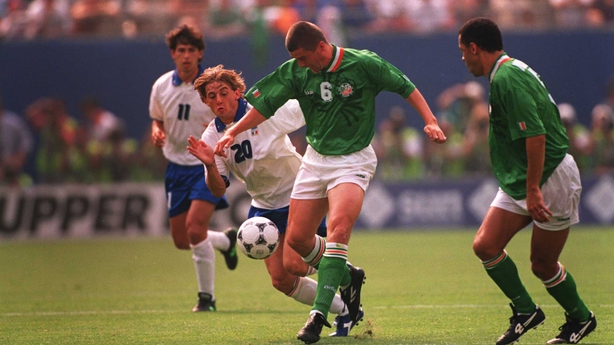 He'd have to make do with a role on the right wing in Jimmy's team, but the former Manchester United enforcer was blessed with so many qualities that he'd be a force anywhere on the pitch. An incredible competitor who, especially in his younger days, had the engine to drive from box to box all day long. 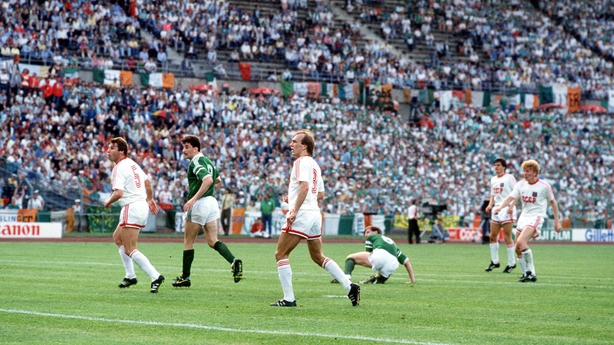 His father Ronnie senior won two caps for Ireland, and the apple didn't fall far from the tree. A wonderfully accomplished midfielder, Whelan forced his way into the Liverpool winning machine of the 80s. He started as a winger so would have no problem with the left-side berth handed to him by Jimmy here; Whelan only moved into a more central role with his club when John Barnes came to Anfield in 1987. Will always be remembered for that incredible, acrobatic volley against the USSR at Euro 88 - his finest moment in green. 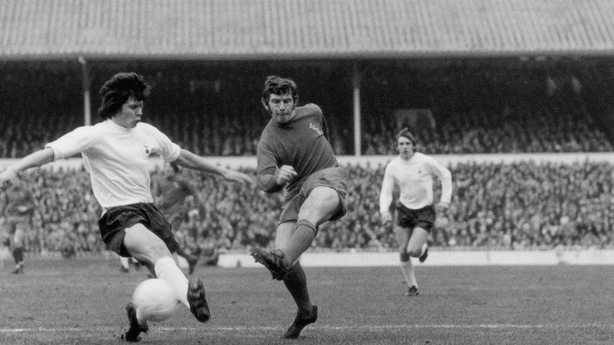 Another technically brilliant midfielder who could put the ball on a 20 pence piece from 50 yards away. The diminutive Giles was teak-tough and never one to shirk a tackle, but it was his vision and astonishing football brain that marked him out as one of the great midfielders of his era with Leeds United. Played 59 times for his country before a spell as player-manager. 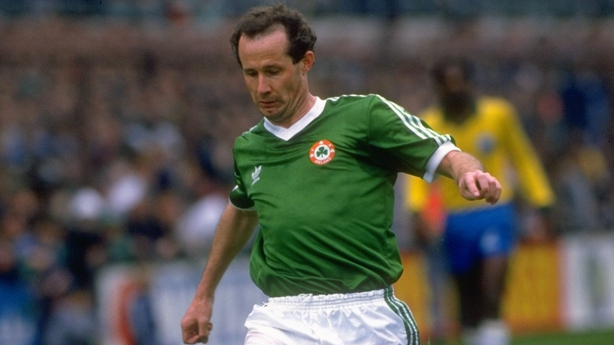 Beside Giles, his protege. Brady made his debut in 1974 against the USSR as an 18-year-old rising talent. Giles played beside him but liberated the teenager by dropping deep and encouraging Brady to pull the strings. He did, and although Don Givens hogged the headlines thanks to his hat-trick in a memorable 3-0 win, this was the game Brady announced his formidable talent to the nation. Still revered both at Arsenal and Juventus, the former St Kevin's Boys prodigy remains of our finest ever footballers. 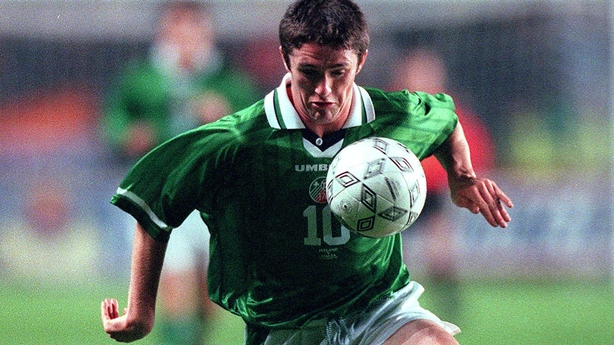 "Any man who gets the number of goals Robbie's got, has to be in any team."  Will we ever see his like again? In his final game for Ireland, against Oman, he brought the house down with a nonchalant flick over a defender and predatory finish. That brought his haul to 68 goals, level with Gerd Muller; a fitting end to an incredible career. 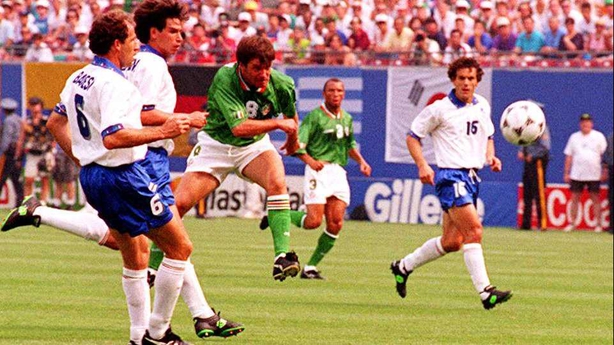 Playing 'in the hole' for Jimmy's selection, Houghton gets the nod for his intelligence and knack of scoring huge goals in a green shirt. His header against England at Euro 88 and lob over Italian keeper Gianluca Pagliuca at USA 94 are two of most memorable moments in Irish sport, but Houghton always brought industry and invention to his displays for Ireland. Another terrific servant.