Liverpool manager Jurgen Klopp has reassured Alex Oxlade-Chamberlain he has not made a mistake in coming to Anfield.

The 24-year-old left Arsenal in a £35million deal on deadline day but has so far been restricted to just 57 minutes in three substitute appearances, having previously started all four matches for the Gunners and also two for the national team.

However, the England international has been given the time to adjust to his new surroundings and Klopp's methods and will make his first start at Leicester in the Carabao Cup.

"I thought it made complete sense for Alex to change club and to come here," said the Reds boss.

"He has settled in perfectly. He knew at least all the England players and a few others.

"He is a really nice lad so it is easy for him to settle into a new team. He knows the situation.

"He played all the games for Arsenal from the beginning and now he comes here and is on the bench so it looks, 'Oh, not the best decision', but it is long-term thing.

"We want to use him and to prepare him also. It is all good from this side at the moment."

Klopp dismissed suggestions Oxlade-Chamberlain's development had been stunted at Arsenal. 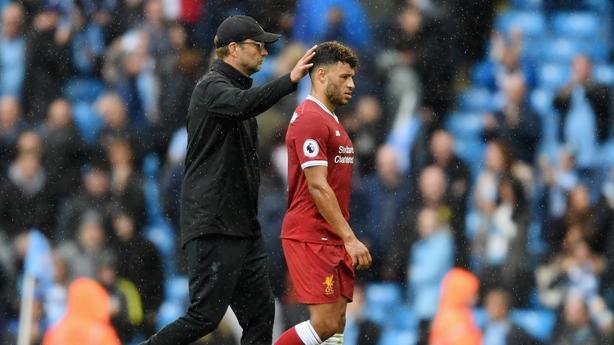 However, he hoped to bring out more in a player whom he believes was still growing under Arsene Wenger's leadership.

"A new start is very often a kind of relief, that's how it is," he added.

"You are in a situation with your old club - and I don't say this about Alex specifically - and you accept it and it is difficult to make the next step.

"Arsenal changed a lot since Arsene is there. I am sure they didn't always play with three at the back and with wing-backs and so Alex played in different positions when he was there.

"It is the highest quality if you can play in different positions in the Premier League. That says a lot about you.

"The judgement from outside may be that you don't develop but playing different positions is development.

"Probably when Alex was 18 or 19 people thought he would be 'the man' - as people think a lot of times pretty early - and immediately you put a rucksack on their back. That makes development not easy.

"He's at a perfect age and is still able to make big steps."

Klopp will also give first starts of the season to third-choice goalkeeper Danny Ward and midfielder Marko Grujic among a raft of changes as he juggles four matches in 11 days.