Jurgen Klopp's complaints about a self-fulfilling prophecy came back to haunt him as Liverpool suffered yet more defensive dithering in the 1-1 draw at home to Burnley.

Liverpool's shortcomings at the back were placed under the microscope this week after conceding a lead in the midweek Champions League draw with Sevilla.

And despite the German's protestations, the Clarets provided more evidence for the case against the defence.

Sean Dyche's well-drilled side took the lead through Scott Arfield with their first shot on target. Hesitation by centre-backs Joel Matip and Ragnar Klavan allowed the ball to drop between them in the middle of the penalty area.

Mohamed Salah's fifth goal of the season, and his fourth in succession at Anfield, quickly restored parity. But what followed was more a failure of Klopp's attack to break down Burnley's determined defence as they finished with 35 shots but just nine on target.

They would not have been in that position had they been able to keep a clean sheet, but after Klopp backed his defenders on Friday even he was left howling 'How?' on the touchline after going behind.

Matip, under pressure from Chris Wood, and Klavan both failed to deal with Robbie Brady's looping header from James Tarkowski's raking crossfield diagonal pass. And that gave Arfield plenty of time to rifle home a half-volley in the 27th minute.

Faced with a Burnley formation which on one occasion appeared to be 8-1-1, Emre Can opted for the direct route to bypass the stifling coverage and was immediately rewarded. Salah, who was denied an earlier claim for a penalty after a challenge by Tarkowski, brought down the pass and fired low past Nick Pope.

The Egypt international is already looking a shrewd signing.

However, Salah is more effective when paired with Sadio Mane on the other flank, and with the Senegal international suspended Liverpool were blunted somewhat. That was even with the return of Philippe Coutinho for his first start of the season as one of seven changes.

Liverpool's win rate with Mane is 69 per cent, without him it is 44 per cent and this was one of those games where they really missed him as even Coutinho's prompting and probing could not compensate.

The Brazil international, who a month ago handed in a transfer request in an attempt to force a move to Barcelona, received a rapturous welcome at Anfield and was probably guilty of trying too hard in the early stages. He eventually settled down and proceeded to pull the strings in midfield. 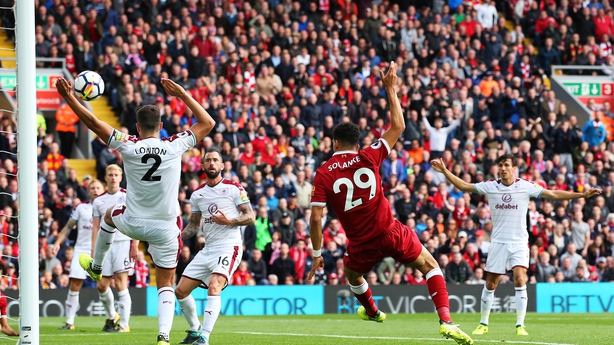 It was virtually one-way traffic from there in - Brady had Burnley's second shot on target with 13 minutes to go - as Coutinho, Can, James Milner, Andrew Robertson and Trent Alexander-Arnold all had chances. Substitute Dominic Solanke hit the crossbar from close range late on.

Burnley's game plan held firm, however, and they could have nicked it themselves when centre-back Ben Mee had one effort headed over by Matip and another saved by Simon Mignolet in the same attack.